MULTIFACETED IS THE FASTEST HORSE 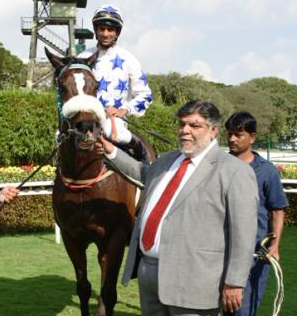 Smarting under the defeat at the hands of Enigma in his last essay, twice winner of the Sprinters' Cup, Multifaceted from the stables of Darius Byramji bounced back to win the Bangalore Sprint Championship Gold Cup in resplendent style. The winner piloted by top gun Trevor Patel was keen and ready to settle a score with Enigma and to the delight of the local buffs, the star sprinter produced a true blue effort to prove that he is the fastest horse on the Indian circuit. Enigma finished a satisfactory second, while Golden Oaks found the first two too hot to handle.

Earlier, Trevor displayed exemplary saddle artistry on the Irfan Ghatala schooled Kensington Court in the principal added attraction, the Dr.KM Srinivas Gowda Memorial Trophy. The leading pro appeared in no hurry and was supremely confident, allowing Kensington Court to race nice and easy in the fourth position before he setalight the in-form public choice approaching the distance post and the winner readily produced his best to edge out arch rival Eternal Princess who in her attempt to make every post a winning one went down fighting. Later it was learnt that the Satish Narredu ward was clipped during the race and the injury the "princess" suffered, it is needless to mention, stopped her from performing at the optimum level.

After the promising local apprentice Salman Khan guided home Spectacular, leading trainer Padmanabhan trusted the youngster to come good again on the two favourites Only You and Amreli. Salman displayed good poise while partnering Only You, while Amreli despite his copybook effort failed to even save money in place. The lesser fancied Yukan from Sulaiman's yard pegged back the belated effort of Nikolina in the Alekona Plate and this helped Trevor  register a grand treble and keep his hopes alive in the Jockeys Championship race

Seige Perilous from leading trainer Prasanna Kumar's yard and Garamond from the stables of Irfan Ghatala dominated the finish of the Bourbon King Plate before the former proved too good at the end. The winner despite failing to gain a favourable position early on in the race unleashed a good turn of foot to assume command a furlong from home before putting the race to bed in emphatic fashion. Now that Seige Perilous appears to have touched peak form he is likely to come out on top again when saddled next.

After a couple of suggestive efforts, Mrs Thatcher helped provide Padmanabhan a reason to smile winning the concluding event, the Commanche Plate in convincing fashion. Divya Shakthi from MR Singh's yard garnered the maximum support in the betting ring, but the public choice flopped in her effort to pull off a coup and had to rest content with the third spot.