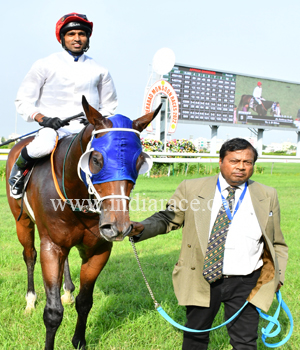 Trainer Leo D’Silva schooled Ayr’s two-month trip to Bangalore this summer definitely had a positive impact on his ability which was evident when the bay colt claimed the PG Reddy Memorial Cup, his second success within a space of only ten days. Ayr (Roderic O’Connor – Book Thief), the only three-year old in the field of ten, was entrusted to Kuldeep Singh after his last victory over a sprint in the hands of Akshay Kumar and asked to take on a seasoned lot over a seven-furlong trip. Without taking away any credit from Ayr’s winning effort, it must be mentioned that his victory was largely aided at the start itself by Kingston (drawn 4), who veered to his left and sealed the fate of all six horses on his outside especially the fancied ones – N R I Sport, Show Me Your Walk and Painted Apache.

The collision caused by Kingston on whom Gaurav had momentarily lost control was so bad that jockey B Nikhil was nearly dislodged from atop Beauty Flame. The other five riders had to pull their horses as a precautionary measure and lost precious ground in the process. The effect Kingston’s wayward jump had on the eventual result was clearly evident as the long shots Full Volume, Super Angel and Kingston, the culprit, followed Ayr home.

Meanwhile Kuldeep hustled Ayr into the lead from draw one and was joined by Full Volume and Show Me Your Walk, who recovered from the unsettling start. The latter chased Ayr till entering the home stretch and faded out gradually to finish in the rut. Ayr then warded off Full Volume’s attack and kicked on to win by a length. Super Angel ran on to be third ahead of Kingston. The runs of N R I Vision and Painted Apache should be ignored.

Later, immediately in the next race, K Satheesh trained and apprentice RS Jodha ridden Classy Dame (Corporate Jungle – Yasmine) also registered an encore with a start-to-finish effort. The mare, leniently treated by the handicapper despite her facile win earlier, didn’t let go of the opportunity to earn precious stakes for her connections on promotion. Theo’s Choice laboured hard to end second ahead of Explosive, who ran on from tail end to finish third. Linewiler made no impression when finishing fifth behind Blazing Jupiter.

Classy Dame’s two barn mates, Blissful (Net Whizz – Incanto Bliss) and Mark My Day (Crimson China – Amazon Choice), gave a somewhat similar speedy display in the split events of the Hyderabad Plate. Satheesh’s astute placement of his wards fetched him rich dividends as he led in a trio of winners during the day. After a lung-opener exactly a week ago when she went down to Lifes Song, Blissful ran true to form in the older set. Kuldeep hit the front with the chestnut mare soon after the start and she hugged the inner rails even as N R I Touch and favourite Strategist were hot on her heels. As the race came to a boil Blissful was ridden plain hands and heels by Kuldeep as she left Strategist and N R I Touch fighting for the crumbs.

Nakhat Singh partnered Mark My Day’s win was equally impressive if not better in the lower division of the Hyderabad Plate. Nakhat showed no haste as Mark My Day was drawn wide and had him settled behind favourite N R I Vision and Rhythm Selection in the initial stages of the race. The dark bay gelding moved resolutely to go past the tiring top-weighted favourite at the distance post and won untroubled thereafter. N R I Vision, Top In Class and Miss Marvellous ended in close proximity, five lengths behind the winner. Makhtoob ran hopelessly throughout.

Sparingly raced Baudelaire (Kingda Ka – Critics Choice) from Laxman Singh’s stables scored an impressive win after unleashing a devastating run in the straight to overpower leader Black Onyx who was being hailed as a winner close home. Baudelaire’s chances looked slim when entering the straight but the well bred gelding responded gallantly to jockey K Mukesh Kumar’s urging as he was pulled out and shown daylight in the last furlong. Favourite Bellagio never seemed to be hunt and ended a tame third, a distance ahead of Special And Thong.

Pleroma (Planetaire – Cockayne), who is bred as half-sister to classic winner Tiger Tops, shed her maiden status in style in the opening event of the day. Yaletown led the field when Barbet relinquished the lead in her favour after travelling for two furlongs while Akshay Kumar had the RH Sequeira nursed filly in striking distance. The even-money favourite was set in motion with a couple of cracks by Akshay as the heads turned for home and she forced Yaletown into submission two furlongs from home. Pleroma was eased up as Barbet came with re-run to take the second place ahead of Yaletown and Carnival Lady.