EMPEROR RODERIC LORDS OVER HIS RIVALS IN POONAWALLA MILLION 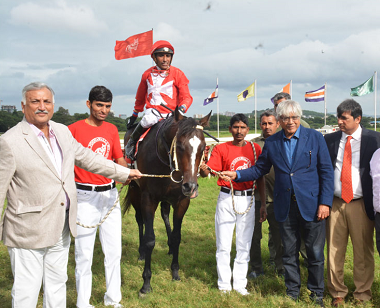 Pesi Shroff trained Emperor Roderic who had let down in his first appearance this season, made ample amends as he trounced his six rivals with a strong wire-to-wire run in the SA Poonawalla Million (Gr.3). The bay colt was unwilling to play the waiting game which forced Pradeep Chouhan to give him his head as Emperor Roderic took over the running from Golden Neil after a travelling a furlong from the gates. Emperor Roderic, who was lesser in demand than only Dangerous, then reigned supreme and won quietly convincingly from Great Guns.

Adhirajsingh Jodha schooled Dangerous, who was runner up to Philosophy at Bangalore and finished ahead of a good set including the winner’s stable-mate King’s Ransom, shared the spotlight in the betting ring with Emperor Roderic but failed to make the desired impact in the race. Dangerous jumped out last from the gates and gave Kalamitsi company in the rear till the bend. Meanwhile. Emperor Roderic (Roderic O’Connor – Mine Forever) continued to dictate terms and shrugged off Great Guns threat in the home stretch and had the race wrapped up after a couple of reminders from Chouhan. With Dangerous and Snowfall going nowhere in the straight, Kalamitsi ran on to be third ahead of Golden Neil.

Adhirajsingh however picked up the day’s support event, Villoo C Poonawalla Million, with Gold Kite (Surfrider - Gold Bag) who was confidently guided by A Sandesh to her maiden success. Gold Kite snatched the lead from Weronika shortly after the start and showed a clean pair of heels to her opponents as they followed her into the home stretch. Hawk Of The Wind ran on well after a sluggish start to finish second with House Of Lords and Claudius finishing close behind. Claudius seemed outpaced in the early part of the race and Gold Kite was home and dry by the time Shroff’s ward could warm up to his task. Debutant Sweet Emotion was prominent behind the early leaders till the heads turned for home but could quicken when urged by Nikhil Parmar.

Sandesh was at his best when he steered SK Sunderji nurtured filly Kaitlan (Roderic O’Connor – Aviette) to a narrow win over Prinia and Sierra Dela Plata in Racing On Play Rwitc.Com Plate. After following Hagibis and Mighty Thunder into the straight, Kaitlan ranged alongside the latter opposite the grand stands. Meanwhile, Trevor Patel ridden Prinia, who failed to take a fluent jump, came through the shortest way and took the narrow opening between Mighty Thunder and Kaitlan. Neeraj Rawal driven Sierra Dela Plate also produced a menacing run on the wide outside but Sandesh was in no mood to accept defeat. In a last ditch attempt, Sandesh asked Kaitlan to dig into her reserves and the filly responded gallantly to her rider’s call. She won the three-way contest by a whisker from Prinia with Sierra Dela Plate a head away. What makes Kaitlan’s success remarkable is the fact that she was conceding a lump of weight to the field including her nearest rivals.

In a similar effort earlier in the day, Sandesh helped S Waheed trained favourite Cognosco taste her maiden success. In a change of tactics. Cognosco hit the front on this occasion and built a lead which proved to be a cushion when Dowsabel exceeded the expectations of her connections and almost toppled the winner. The runner up’s barn-mate and second favourite Cipher didn’t make any impression and ended a tame fourth behind Sandman, who may found the trip a bit sharp for her liking.

One Wish and Menilly, the duo hailing from Sunderji’s yard, dominated the finish in the day’s curtain raiser though making their first appearance after a gap of more than 7-8 months. Birkin Blower’s runaway attempt was scuttled by Sky Fall at the turn but the top weight, though driven out by Sandesh, couldn’t repel the onslaught of One Wish and Menilly who made their move in tandem in the final stages of the race. It was, however, the R Ajinkya driven mare One Wish (Arazan – Rhapsidion Snow) who got stronger at the finish and held on from Menilly. Sky Fall finished third ahead of Desert Fire, who relishes running the front, couldn’t grab the lead as Birkin Blower was swiftly out from the gates.

Bezan Chenoy schooled Cellini (Arazan – Yomalo) was ridden confidently by rookie Praveen Shinde when upstaging favourite Rodrigo over a five furlong scurry. Rodrigo showed plenty of initial speed to go ahead and was followed by his main adversary Esperanza. The Dallas Todywalla trainee with Sandesh in the saddle had the upper hand over Esperanza but the winning post, though just 50m away, look far too distant when Cellini came with a flying run to nail him. Like Joaquin, Esperanza too failed to achieve a hat-trick and seemed shorn of the speed and brilliance she had displayed during her last two runs. Esperanza’s effort should be taken with a pinch of salt considering the fact that ‘horses are not machines’.

Ivor Fernandes saddled Alpha Gene (Smuggler’s Cove – Beldon Hill) lived up to the promise shown in his last run and upset the applecart of hot favourite Rue St Honore. The Altamash Ahmed trainee cruised past leader Nord as soon as entering the home stretch but found Alpha Gene breathing down her neck. Dashrath Singh found a good response from Alpha Gene when alerted to his task and he wore down the favourite in the last furlong. Willy Wonkaa ended faraway to be third while Twelfth Earl took the fourth berth.

Kamaria (David Livingstone – Ridawana) was by far the easiest winner of the day. The grey mare from Karthik Ganapathy’s stables gave no anxious moments to her supporters as Bhawani Singh powered her to go sweeping past no hoper Michigan who brought the five horse field into the straight. Kamaria went sailing clear of her rivals and won easing up close home. Brazos ended up second while Mount Sinai finished a close third. Royal Alamdaar ran a poor fourth.