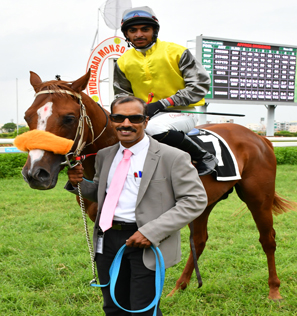 It was not exactly a case of the form of horses’ doing a disappearing act during the conduct of racing at Malakpet on Monday, but at the same it was also true that the ability of several well fancied runners was inexplicably blunted. No surprise then if gullible punters were taken for a ride, an expensive one, by the favourite horses.

The three-year old filly Barbet was in great demand in the betting ring to win the Major Mir Mujtaba Hussain Memorial Cup run over nine furlongs. The Laxman Singh nursed and Akshay ridden filly ran abreast of True Icon in the fourth position as Wallop And Gallop and Francis Bacon headed the field. Both Barbet and True Icon overtook the leaders at the 300m marker and were engaged in a keen tussle. Akshay somehow couldn’t bring the best out of the Barbet and his efforts were paled by the confidence shown by rider Gaurav Singh astride trainer Ravinder Singh schooled True Icon (Sedgefield – Saporelli) who kicked on gamely in the last furlong to win by three parts of a length. Just Incredible looked dangerous as he made his bid on the wide outside but failed to overhaul his younger rivals and ended a good third ahead of Galwan, who graced the rear till the final bend before deciding to make his presence felt.

Lamha from RH Sequeira’s barns was another Akshay ridden hot favourite to bite dust. The mare dropped back as the field headed by Linewiler settled down for the seven furlong journey. Makhtoob joined Linewiler and both were in charge till a furlong and half from home where Four One Four took over but had the upper hand briefly. Mark My Day also made his bid but it was Leo D’Silva groomed Royal Grace (Leitir Mor – Coccinella), who was lethargic at the start as usual, was moving the fastest of all, Royal Grace overhauled the leaders and went bouncing clear of Mark My Day, Mirana and Sun Dancer. Mirana, who lay at the wrong end of the field initially, entered the straight along with Royal Grace. The top-weighted Mirana was not fully extended by Ashhad Asbar but did enough to advertise her fitness which could be exploited sooner rather than later.

The five-year old mare Beauty Flame upset the applecart of hot favourite Turning Wheel to claim the Bhongir Cup in the hands apprentice Santosh Raj. Akshay ridden and RH Sequeira saddled mare Turning Wheel, who won start to finish over seven furlongs in her last essay, fought for her head aggressively as Melting Ice set the pace over the mile furlong. Probably disappointed after being ridden in check, Turning Wheel refused to put her best foot forward when Akshay asked her for an effort on entering the home stretch. Santosh meanwhile brought Beauty Flame (Whatsthescript – Jack In The Cat) with a big run and surged clear to win convincingly from late finishing Forever Bond. Explosive and Ice Berry filled the frame on sufferance. Turning Wheel plodded and could finish ahead of the exhausted Melting Ice and Sorry Darling who trailed the field.

Punters who thought that it would be third time lucky for the maiden filly Clefairy burnt their fingers badly as the Prasad Raju nursed filly flopped yet again. Suraj Narredu driven Rovaniemi went to the front as is his wont but he managed to stay the course as Clefairy was outpaced throughout and couldn’t deliver the goods for the third time in a row. AA Vikrant ridden Avancia, who went in chase of Rovaniemi (Shifting Power – Shamrock) in the straight, may have saved her best for some other day as she made what seemed to be half-hearted attempt to collar the Laxman Singh trained winner close home. Lights On ran an improved race to finish third ahead of Clefairy, who was unwilling to respond positively to Akshay’s call.

Sequeira saddled Sweet Dancer (Roderic O’Connor – Avec Pleasure), who was running after a gap of six months and making her first appearance this season, Ridden by Gaurav Singh, Sweet Dancer was kept a handy second behind Yaletown, who was making her seventh bid within a span of seven weeks. Yaletown weakened about 100m from home where Sweet Dancer and Wind Sprite, who had gradually improved from behind to join the former. This was only time this week when Akshay came close to winning a race but the tenacity of Sweet Dancer and Gaurav’s resolve frustrated him. Suraj made his move astride the favourite Humanitarian by pulling her out towards the outer lane about two furlongs from the wire. Humanitarian gathered momentum but it was too late. The Laxman Singh trainee ended half length behind Wind Sprite who was a neck shy of the winner. Yaletown who did all the initial running retired to be fourth.

Doe A Deer, who was now saddled by Mir Faiyaz Ali Khan after the change in her ownership, delighted her connections with a heart-warming performance. Despite being drawn wide, Dashrath Singh settled the filly and was in close attendance of the leaders headed by Happy Go Lucky who called the shots till the last furlong, and then alerted Doe A Deer to her task. Rank outsider Plethora meanwhile got going but Dashrath’s power-packed finish enabled Doe A Deer to prevail over Plethora by a neck. Favourite Malibu jumped out sluggishly from the gates and was hard-ridden by K Mukesh Kumar before she could get into her stride. Malibu’s late rally fetched her the third spot ahead of N R I Millenium. A lot of smart money flowed Malibu’s way as she was backed down from 5 to 1 to close at 9 to 4 against. Thus the odds against pre-race favourites Happy Go Lucky and Doe A Deer drifted out in the betting ring. N R I Millenium, who was in a striking position behind Happy Go Lucky near the 200m post lost his footing under pressure and almost collided with the inner rails and fell back to be fourth ahead of Archangels, whose mettle was not tested on this occasion.

It was a disastrous day for those who back favourites blindly. Losing and winning is part of the game and a seasoned punter understands this well. Yet, what came as a surprise for many race-goers was the fact that jockey Akshay Kumar, who leads the jockey’s championship tally with 26 winners from 67 engagements during the current season, failed to score in the last two meetings. That said, there were enough smart punters who had good returns as they hit bull’s eye with Beauty Flame and True Icon. To sum it up, let’s say Akshay was “out of form” this week. Let’s hope that this was just an aberration and Akshay strikes form soon for the sake of his fans.