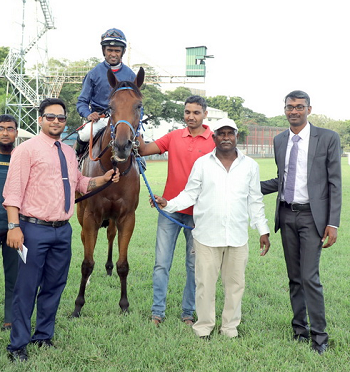 Leading trainer James McKeown and promising apprentice jockey Saqlain cornered glory recording a double apiece on a day punters had the better of exchanges, three firm favourites and one well supported second choice justifying their ranking and rating in the competitive seven-event card.

Pense'e garnered maximum support in the plum event, the Bangalore Turf Club Trophy run over a distance of seven furlongs. The McKeown ward piloted by Neeraj Rawal, back after his successful stint in the United Kingdom, was backed down from (4/1) to (9/4),the insiders and the right connections, confident that the five-year-old mare, who looked a picture of fitness at the parade ring will come out tops in the creditable 10-horse field. And to the delight of the McKeown camp, Pense'e provided Neeraj Rawal an arm-chair ride to success, producing an astounding gallop at the top of the straight to sail clear and put the issue beyond doubt in the final furlong. Pense'e on the strength of this impressive victory is set to provide an encore. Priceless Ruler finished second behind the public choice, while Empress Eternal managed to save place money.

Later in the concluding event, La Jefa brought off a successful coup, winning the Botanical Garden Trophy in the Stewards room after Hindu Singh partnering La Jefa, smashed in the betting ring from (7/1) to (7/2), lodged a successful objection against P Saikumar, the rider of the winner Safety for shifting out and bumping his mount in the final 100 metres and as a result he (Hindu Singh) could not ride out his mount in the last 50 metres and this cost him a certain race. The Stewards afer a long deliberation rightly decided to upheld the protest and this helped James record a fine double. Zaneta from B Suresh's yard was fancied most in place and the chestnut filly comfortably finished third to the delight of her supporters.

Astride the overwhelming favourite Rays Of Sun in the Newmarket Handicap run over a distance of seven furlongs, Saqlain produced his best, packing punch on the public choice to `nose' out Illustrious Ruler piloted by Nakhat Singh in the final stride. The runner-up, who failed to gain a favourable position early on in the race was pushed by Nakhat to streak ahead four furlongs from home and the game galloper stuck to his task and looked set to score before Saqlain in a never-say-die effort helped Rays Of Sun edge out the Robert Foley ward at the shadow of the winning post. Torbert finished a suggestive third and is one for the noteboo0k, while Ganton completed the frame.

The Ajith Kumar-trained Mystic Zlatan proved too good in the Selangor Handicap run over a mile. The topweight piloted by the improving Bengaluru-based apprentice Alex Rozario carried too many guns for his eight rivals powering home without unduly extending himself. Wisaka finished second ahead of Swiss Agatta, while Welcome Chakkaram raced in patches and only managed to make the frame. Mystic Zlatan is in fine nick and it will pay to support the Ajith ward again in the higher class.

The most fancied runner of the day, Prince Purple from B Suresh's yard bit the dust in the Del Mar Handicap, failing to snuff out the challenge of the 10 to one long shot Glorious Sunshine from Fazal-Ur-Rehman's yard. The winner who graced the wrong end of the field for most part of the six furlongs trip produced a winning gallop at the all-important end to beat the half-money favourite who after assuming command at the top of the straight lacked the gas in the tank to match strides with the winner in the final 50 metres. Admiral Shaw did well to take the third spot and it will not be long before this Sebastian's ward wille earn his cornbill.

Augusta was one other from Suresh's yard who let down large following in the Sandown Handicap run over a sprint. The favourite piloted by Sai Kumar found Race To The Stars from the stables of Robert Foley too hot to handle and much to the chagrin of her supporters had to settle for the runner-up berth. Valeska who had her share of followers too failed to raise a winning gallop and finished a poor fourth behind Hallucinate.