FAITH HAS THE LAST WORD 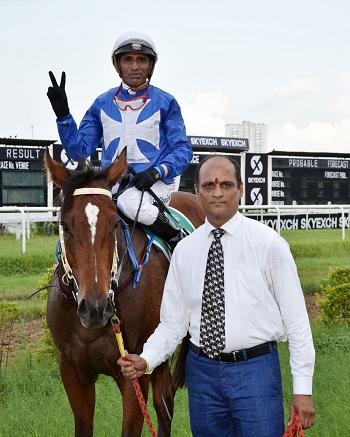 Pesi Shroff-trained Faith (Admirality-Peritomoreno) lifted the SkyEch.Com Calcutta Fillies Trial Stakes quite comfortably after lying fourth of six runners for most part of the seven-furlong trip while Beauty Blaze and Queenstown fought for supremacy up front. Once jockey PS Chouhan set the filly alight in the straight, she displayed wonderful acceleration to sail past the front runners who were left battling for the minor placings. Somata ran on to finish fourth. Trainer Shyam Habbu was seen deputising for Shroff. It is relevant to note that the entire field of six for the Fillies Trial  Stakes, being three-year-olds,  have been rather considerately left at their original ratings by the handicapper. Thus, both Beauty Blaze and Queenstown can be expected to win handicap sprints in the near future while Sonata may relish an extended trip in Class IV.

The race that brought visitors to the edge of their seats was the Replicate Handicap where Silverita and Bahuleyan fought tooth and nail till the wire with the former prevailing by a narrow margin. It would be fair to say that Hindu Singh atop Bharath Singh-trained Silverita (Multidimensional- Silverina) outwitted Suraj Narredu on Bahuleyan. Near the 600m marker he rather neatly dropped his mount back and opted for the rails. Thereafter he got a dream run down the centre which gave him a narrow advantage over his nearest rival and he rather creditably clung on to that advantage till the very end. Kudos to Hindu!

The SkyExch.com Mile Cup was pocketed by the handicap horse Nazaakat (Kingda Ka – Top Romance) from the yard of Arti Doctor. The filly had finished a good second to Sicily in her last essay and maintained that form in the upper class at the bottom of the scale. Apprentice Tejeshwar took her to the front early and she stayed there all the way. The favourite Orchids needed the run while the other fancied runner Sunshine Prince ran below expectations.
Jockey Neeraj Rawal on Orchids had plenty to cheer about in the Brush Aside Handicap where his mount Nova (Letir Mor-Sorrento Steel) from the stable of HS Bath got the better of the course favourite Stockbridge. Available at 9/2, Nova was given a copybook ride by Neeraj. Tracking Kimaya till the top of the straight Nova stole a march on her adversary who could do nothing more than follow her home.

The afternoon commenced with a successful gamble by the Vikash Jaiswal stable which had four runners in the small field of six. Divya Shakti (Sedgefield-Rio Rojo) moved well in the straight to outpace stablemate Script and El Patron in the hands of Sujit Kumar Paswan. The curtain came down with the public choice Pot Of Gold (Roderic O’Connor -Mine For Ever), PS Chouhan up, making every post a winning one to give trainer Patrick Quinn his fourth win of the season, which places him at par with Neil Darashah at the top of the trainers’ tally.