SKY FALL PROVES TOO SPEEDY FOR HER RIVALS 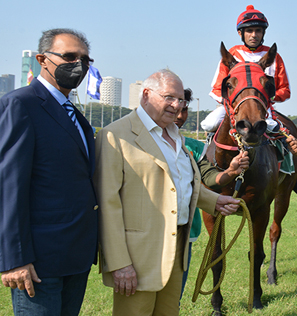 Dallas Todywalla groomed mare Sky Fall (Leitir Mor – Classic Sky) took a smart jump from the gates and made every post of the six furlong trip for the Royal Calcutta Turf Club Trophy a winning one. Lesser fancied than her two fancied rivals, first favourite One Wish and Augustus Caesar, Nikhil Parmar ridden Sky Fall shot into the lead at the start which proved to be unassailable though Augustus Caesar could only reduce the margin of defeat when warming up late. Favourite One Wish, who was in chase of the winner, flopped miserably when the race came to a boil and ended last in the field of four. One Wish reportedly had bled internally which explains her poor show.

Backed to the exclusion of her six rivals in the Mumbai season’s curtain raiser, Inamorata (Roderic O’Connor – Coccinella) ran true to expectations and obliged her followers with a narrow win over Pyrrhus. Bottom-weighted Mighty Thunder made the early running with Pyrrhus and Freedom in close attendance whilst Inamorata settled close behind. Neeraj Rawal astride Pyrrhus made his move as the field straightened for home and threw a challenge at Mighty Thunder who refused to cave in. Meanwhile Pradeep Chouhan brought Inamorata into contention. Inamorata warmed up only in the last furlong and Chouhan drove her powerfully to overwhelm Pyrrhus who had just got the better of Mighty Thunder. The narrow margin of defeat may flatter the runner up but the fact remains that Inamorata proved too good for her opponents. Pyrrhus has been unfortunate not to earn her maiden bracket but her agonising wait should get over soon.

Arcana (Roderic O’Connor – Mystic Romance), the second winner led in by Shroff during the day was also well-backed in the betting arena. The speedy bay colt ridden by apprentice Kirtish Bhagat tackled Soup And Sandwich two furlongs from the gates and assumed control of the running. Arcana held the lead but Kirtish had to exercise control over the colt and keep him racing on an even keel. Initially Enlightened got closer after slipping through the inner rails while Trevor Patel also got Rodrigo going once the field had reached the grand stands. Kirtish pulled out his whip to get Arcana to quicken but the favourite shifted out. Kirtish fortunately changed his whip hand in the nick of time and drove Arcana vigorously. Arcana had the winning post coming to his rescue as Rodrigo came breathing down his neck before going down by a whisker. Esperanza ran on to be third and had Lord Vader a neck behind.

Malesh Narredu saddled Wall Street (Speaking Of Which – Nifty) gave no anxious moments to his supporters in the Welcome Trophy. Suraj Narredu driven Wall Street cruised past Rubik Star and Marlboro Man after the field entered the straight and brooked no opposition from his rivals thereafter. Wall Street won convincingly from Emrys, Full Of Grace and Django who were left fighting for the minor places.

The four-year-old filly Leto (Roderic O’Connor – Devoted Eyes) from Imtiaz Sait’s yard gave a rousing performance to humble her younger fancied rivals in the Gateway Of India Trophy. Ridden by Vishal Bunde, Leto unleashed a sparkling run to pierce through the gap between Superleggera and Desert Fire after Majestic Warrior had brought the field into the home stretch. Vishal gave a confident ride to Leto, who held on gallantly from late finishing Regal Command. Fortunate Son ended a neck ahead of Majestic Emperor. Fortunate Son probably didn’t like the waiting tactics adopted by his connections on this occasion and Parmar losing his whip at a crucial juncture didn’t help Fortunate Son’s cause. However, Fortunate Son lives to fight for another day. Favourite Emperor Roderic entered wide into the straight and drifted further as Chouhan tried to make his presence felt. He was thus unable to display his true potential and ended a disappointing fifth, a neck ahead of Superleggera, who should do well among older horses.

Three nondescript runs after her return from Hyderabad, SK Sunderji trained Sensibility (Planetaire – Close Link) came into her own in the concluding race of the day. The R Ajinkya ridden filly grabbed the lead as soon as the gates opened and showed a clean pair of heels to her rivals over the sprint. Apprentice S Saba ridden Pisa ran a fair second ahead of Alpine Star, who chased the winner in vain, and favourite Commandment. The last named reportedly bled through his nostrils. Meanwhile, Kirtish Bhagat got unbalanced and was unseated from his mount Silver Bells, who clipped the heels of Sensibility at the bend.

Remy Red was tuned to the moment by Narendra Lagad which helped him earn his maiden success in the hands of Joy Chinoy. Chinoy kept Remy Red (Varenar – Luminous One) within striking distance of Sonisha till over a furlong left for home and gave the chestnut gelding his head. Remy Red spurted into the lead and was home and dry by the time Trevor Patel ridden Speculator could warm up to his task. Truth And Dare, who failed to hit the board in either of his nine career outings, ran an encouraging third and bears watching hereafter. After sprinting ahead, Sonisha retired to be fourth and is capable of earning her corn bill over a sprint in her own age group.