NO NASTY SURPRISES FOR PUNTERS AS CURTAINS GO UP AT MALAKPET 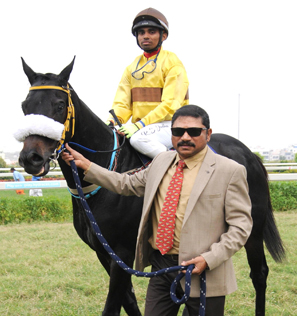 The winter racing season at Malakpet was delayed this year but the sported treated the race-goers kindly as the outcome of most of the results kept punters in good spirits. Had Temptations and Crimson Rose obliged, it would have been a bonanza of sorts for the bettors. However, it was not to be.

Be that as it may, the two-year-old filly Proud Mary (Lord Admiral – Mind Of Madness) recorded the most impressive victory of the day. Trainer Laxman Singh’s ward turned out to be the fittest of the lot as was proved when Proud Mary darted to the front as the starter’s flag came down. Kiran Naidu astride the chestnut filly got an armchair ride as Proud Mary kept increasing her lead steadily and left her rivals struggling in the straight. Bleue Dali tried matching strides with the winner but was outpaced throughout. Bleue Dali, Truth and Voyager followed the winner home.

Proud Mary was not the only horse to have won start to finish. In fact the trend was started by the half money favourite La Mirage (Tenth Star – South Lake), who claimed the season’s opening event in similar fashion. D Netto saddled La Mirage graduated from the maiden ranks with a facile victory as he was brushed into the lead by Suraj Narredu and went on to win untroubled thereafter. Ivanhoe who followed La Mirage from the barriers along with N R I Fantasy, managed to take the runner up berth ahead of Clefairy who ran on to be in the money ahead of N R I Fantasy.

The day’s feature event, the upper division of the Shamlal Gupta Memorial Cup, was lifted by Mark My Day in a pillar to post mission. Apprentice RS Jodha eased Mark My Day (Crimson China – Amazon Sky) into the lead and had the upper hand all the way. K Satheesh’s ward initially repelled the assault of Nightmare as the field entered for home and later warded off the threat posed by Makhtoob, who was three parts of a length shy at the wire. Sun Dancer and Chuckit ran thereabouts to end third and fourth respectively. The rest were simply out for an airing.

The three-year-old filly Mysterious Angel (Smuggler’s Cove – Mykonos) registered her fourth career win when she claimed the Cabaret Plate run over nine furlongs. Despite running beyond seven furlongs for the first time, LVR Deshmukh’s protégé was backed confidently ahead of her seven rivals. Jockey Ajeeth Kumar had Mysterious Angel settled comfortably towards the rails behind leader Campania, Ashwa Raudee and Pleroma till the heads turned for home. Ajeeth immediately switched lanes and alerted the bay filly to her task. Mysterious Angel started to devour ground as Ajeeth drove her hands and heels. She eventually collared her barn-mate Campania in the last furlong and asserted her superiority close home though only by half length. Top-weighted Akido ran on well in the straight to finish a close third. Pleroma, who fought for her head in the initial stages, ran in snatches and ended fourth.

After guiding Mysterious Angel to a confident victory, Ajeeth was found wanting astride Temptations in the next event. The on-money favourite was vanquished by the second-in-demand The Thunder. The Srinivas Reddy nurtured The Thunder (Declaration Of War – Days Of Thunder) showed a clean pair of heels to her rivals as Gaurav Singh wrest the lead at the gates. Temptations, who was racing behind frontrunners Above The Law, and Bellagio in fourth position, went in chase of the winner in the last two furlongs. Despite Ajeeth’s desperate attempt the favourite was unsuccessful in drawing level with Gaurav Singh piloted The Thunder. Bellagio held on grimly to the third place from Blast In Class. Doe A Deer found her galloping shoes far too late to make any difference to the result. She ended a close fifth.

Akshay Kumar ridden favourite Crimson Rose suffered a fate similar to that of Temptations. Only My Way (formerly named Dr Dee Dee) hit the front with jockey Aneel in the saddle with Crimson Rose racing alongside Fatuma. Akshay shifted gears as soon as the field entered the straight and went all out astride Crimson Rose. Neither S Sreekant groomed Only My Way was in a mood to give up nor was Aneel, who packed enough punch in his finish effort to steer the second favourite to victory. Runner up Crimson Rose was followed home by Angel Tesoro and Fatuma. Angel Tesoro, Linewiler and Salisbury had a lung opener.

Srinivas Reddy led in his second winner of the day through Miss Solitaire (Excellent Art – Guest Connections), who was a failed favourite on debut a month ago. Ashhad Asbar tracked his main adversary and leader Avancia into the straight where he asked Miss Solitaire for an effort. The filly slowly but surely stretched out to overhaul Avancia at the 100m pole. Acrobat finished on gamely to finish a close third while Pinatubo finished fourth.

MS Parmar trained Shazam made amends for his failure as a hot favourite in the lower class earlier to claim the lower division of the Shamlal Gupta Memorial Cup. DS Deora astride Shazam allowed Drd, who dragged his rider and hit the front, to call the early shots and unleashed a brilliant run to go surging clear of Drd in the last 100m. Royal Grace, who finished third ahead of Mirana, covered good ground towards the end but found weight a stopper.

Entrusted to AA Vikrant, D Netto’s candidate Akash (Tenth Star – Amazing Approach) finally found his way to the winner’s enclosure to give his master a profitable double. Akash made gradual progress as Ar Superior headed the field and overtook him in the last furlong. Vikrant kept Akash going to win comfortably from China Town and Silver Lining. Ar Superior faded out to be fourth. Both China Town and favourite My Way Or Highway were inconvenienced when try to make their bid and this run is best ignored.