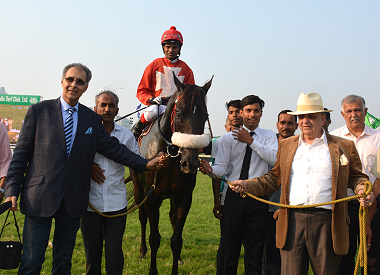 The running of the Betway Indian 2000 Guineas (Gr.1) at Mahalaxmi had a wonderful dose of showmanship on display when Dallas Todywalla trained colt Ahead Of My Time exceeded the expectations of many racing analysts and claimed the second classic of the season. A Sandesh, who partnered Ahead Of My Time in the saddle, not only displayed his classic temperament atop the Guineas winner but gave a gutsy performance in guiding three start-to-finish victors.

Though the start to his career was full of promise, the failure of Ahead Of My Time (Excellent Art – Miss Danehill) over a mile trip in the Deccan Colts Championship at Hyderabad gave rise to scepticism that the colt was bred in the mould of his celebrated siblings, Corfe Castle and Ruffina, who lacked stamina. Ahead Of My Time resumed his career after a two-month break in a handicap event and scored effortlessly. Yet his classic endeavours still lay on the drawing board till Dallas somehow convinced owner Cyrus Poonawalla that the colt would stay the mile trip following which he got the green signal to have a tilt at the second Indian classic of the season.

Ridden well off the pace, Ahead Of My Time was still at the tail end of the field when runaway leader Son Of A Gun was about to enter the home stretch with contestants in tow. Fortune favours the brave it is said and Sandesh clearly had the fortune in his favour when he took the decision to come through the shortest route for home. Ahead Of My Time gained momentum with each stride and was soon running abreast of the runners including favourite Supernatural, who were all waiting for the leader to drop back. But Ahead Of My Time came all guns blazing to pounce on Son Of A Gun and literally swamp his rivals. Supernatural and Mojito were left fighting for the minor places with the former edging out his opponent by a whisker. Bangalore challenger Ravishing Form ran into ta wall of horses at a crucial stage and it was too late by the time Suraj Narredu could extricate him from the mess. Ravishing Form ran fourth and lives to fight for yet another day.

Dallas was the happiest man at the Mahalaxmi on Sunday as Ahead Of My Time justified his assessment that unlike Corfe Castle and Ruffina, who was also his pupil, the colt does have the ability to stay. Sandesh too was delighted at having ridden a flawless race in the Indian classic. Dr Poonawalla, though elated after his property had fetched him another group one event, was gracious enough to give Dallas the credit for insisting that Ahead Of My Time should participate in the Guineas.

Sandesh it seemed had started from where he left off at Bangalore a day earlier when he steered Splendido to a fluent win. The champion rider took favourite Successor, also from Dallas’s yard, on a successful wire-to-wire mission for the Mulraj Goculdas Trophy run over seven furlongs. Successor (Leitir Mor – Sweeping Success) divested Count Of Savoy of the lead within the first furlong and had his rivals chasing his shadow all the way. Count Of Savoy just managed to hold the second slot from Augustus Caesar while Flying Visit, who reportedly bled through his nostrils, was never in it after the half way mark. Taimur jumped out slow again and ended last.

The Altaf Hussain trainee Kings Best (Leitir Mor – Grey Allure) was Sandesh’s second winner of the day. The favourite grabbed the lead shortly after the big field of sixteen jumped out from the gates and was never under any threat of being caught at any stage of the mile trip. Kings Best in fact showed a splendid turn of foot when Sandesh nudged him in the straight and left his rivals in the cold. He checked in seven lengths clear of Galway Bay and Mad Love, who had Majorella Blue and Nostalgic close on her haunches.

Adrenaline was still flowing in the Sandesh’s veins as he achieved a back-to-back double astride Milli (Phoenix Tower(USA) - Athlone(IRE). The Imtiaz Sait schooled filly took charge at the gates and was never headed as Sandesh kept Milli going for a convincing win. Milli thus graduated from the maiden ranks and won comfortably from late finishing debutant Scaramanga, who reportedly stumbled after being interfered two furlongs after the start. Favourite Montgomery ended a neck behind the runner up while House Of Lords ran thereabouts to complete the frame. Walter, who ran green in the straight, should not linger in the maiden ranks for long.

Sait too recorded a back-to-back double when Jubilant Journey (Win Legend – Terra Nova) finally shed her maiden status but only on relegation. Jockey R Ajinkya settled the filly beautifully behind the front-runners as no-hoper Lightning Flame overtook Willy Wonka shortly the start and went scorching into the lead over the mile and quarter journey. Sandesh ridden Willy Wonka regained the lead as Lightning Flame had shot her bolt on entering the home stretch. Jubilant Journey made rapid progress as Ajinkya shifted gears and confidently brought her through the inner rails. Favourite Eleos looked poised to take over from Willy Wonka but only just. Jubilant Journey came with a smooth run to overhaul Willy Wonka and skip away for a facile victory. Willy Wonka ended second ahead of hard-ridden Verdandi who took toll of the tired Eleos and finished in the money.

Amyn Merchant assisted five-year-old Jet Typhoon (Speaking Of Which – Star Of China) from Hosidar Daji’s stables made his way to the winner’s enclosure in the day’s curtain raiser after registering his maiden win. Jet Typhoon tracked HJ Antia saddled favourite Reciprocity into the straight and gained the upper hand after being hard ridden by Amyn in the last furlong. C’est L’amour moved up to run second after Reciprocity faded away. Power Of Neath was shorn of his early speed and toiled hard before finishing third ahead of Victoria Peak.

Hagibis (Sussex – Bling) however recouped the losses for his master when he found an easy victim in favourite Champagne Smile. The latter showed the way to the field after taking off smartly from the innermost draw but had Antia saddled Hagibis in hot pursuit. The favourite lost steam in the last furlong allowing SA Amit powered Hagibis to take charge and romp home in style. Champagne Smile played second fiddle to the winner while Arbitrage ended a faraway third ahead of debutant Mysticism, who graced the wrong end of the field till entering the final stretch and covered good ground to finish fourth.