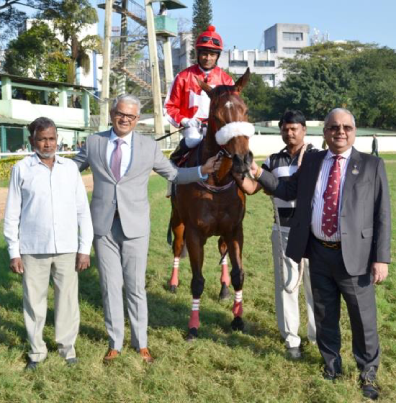 Form played true on New Year's eve. And the railbirds broke the bank. Win, Win, Win it proved to be before the song and dance all night long. All eight winners were strongly fancied including Forest Flame, arguably the best horse in the BTC campus and Knotty Charmer who, so far is the best performed juvenile. Leading trainer Sulaiman Attaollahi deserves a pat on the back for his unflinching support for Forest Flame, when the mare suffered a major setback and the star performer paid back, winning five of her last six starts, while making her master proud on a day punters hit the bulls-eye.

After twice beating the best mare on the Indian racing circuit, Juliette in Pune, Sulaiman chose to bring Forest Flame back home for the winter and in her maiden appearance this season the classy galloper maintained her winning streak in partnership with the top `Knight' Sandesh. Despite the fact that she was shouldering a back-breaking weight of 61.5 kilos over a seven furlongs trip to put the New Year Eve Cup on her Wall Of Fame, the punters solidly supported the mare to add another victory to her distinguished list and she did  it in style. Full marks to Sulaiman for sending out Forest Flame spot on and the on-money favourite produced another top draw effort to gallop home in resplendent style. All Attractive in the hands of Trevor gained the runner-up spot ahead of the vastly improved Imperial Blue, while Priceless Gold, it appears has gone off the boil.

After making a smashing debut, clocking (1:12.69) over a six furlongs trip on the second day of the season, the talented Knotty Charmer from champion trainer Prasanna Kumar's yard was the favourite in all the track reporters' list. And the talented juvenile produced another heartwarming effort to the delight of the `Knotty Seven', powering home in emphatic fashion to record his second straight success. This strongly built son of Gusto, who made light of the big chunk of weight he needed to shoulder, sent out a strong message that he is the big boy they all have to beat in the bigger juvenile tests ahead. Avondale from Sulaiman's yard in receipt of 5.5 kilos from Knotty Charmer was fancied most and in fact closed favourite, most punters pinning their hopes on the debutant on the sole count that the handicap advantage would tilt the balance in her favour. That simply didn't happen. And the reason for that is simple. Class overcomes the many handicaps and in this case 5.5 kilos proved very little and very light to stop Knotty Charmer from making every post a winning one in style. Avondale failed to even save money in place, finishing fourth behind the runner-up Blackstone and the third-placed She's A Lady from Padmanabhan's yard.

A smart last start winner, English Bay from Dominic's yard and another run-away winner in her last essay, Alaskan Jewel from the stables of Azhar Ali rightly garnered the maximum support in the upper division of the Vani Vilasa Sagara Trophy run over a sprint. And in a fire to the wire finish, English Bay powerfully powered by Imran Khan gained the day edging out lesser fancied Tripitaka from Irfan Ghatala's yard and Alaskan Jewel close home. Babulal Paswan astride the speedy Alaskan Jewel again attempted a pillar to post exercise and stayed in front until English Bay and Tripitaka gathered steam to close the gap in the final furlong before the Dominic ward flashed home first to the delight of his supporters. Tripitaka pipped Alaskan Jewel for the second spot, while Contador completed the frame.

The lower division of the event also produced a thrilling finish, the topweighted Montelena from Irfan's yard, My Solitaire from the stables of Prasanna and the Arjun Manglorkar schooled Archway locked in a pulse-pounding three-way contest all through the six furlongs trip before the much improved apprentice Rozario guiding the fortunes of Montelena pulled the rug under the feet of the top gun Akshay Kumar partnering My Solitaire and Sandesh astride Archway. A `head' separated Montelena from My Solitaire, who in turn finished a `neck' ahead of Archway.

Irfan next struck it rich on another last start winner Tignanello. The favourite piloted superbly by top pro Trevor Patel after gracing the wrong end of the field for most part of the 2000 metres trip produced a sparkling gallop in the final furlong to snuff out the challenge of the topweighted Tranquilo and Splendido from Padmanabhan's yard. Disruptor bolted to the front in the hands of Darshan and soon established a 10-length advantage all through the backstretch before he shot his bolt approaching the distance post and at this juncture Tranquilo and Splendido gradually moving up fancied their chances before Tignanello floored them all in the last 100 metres.

Jokshan on the strength of his impressive second behind Flying Quest in his last start was fancied most in the concluding event, the Ghostzapper Plate run over a sprint and the Sriram Komandur ward proved too good for his seven rivals romping home without really extending himself. The strongly supported favourite is in fine nick and is set to provide an encore. Super Ruffian finished second ahead of Bramastram, while the topweighted Lauterbrunnen who had a fair share of his supporters failed to make the board after calling the shots early on in the race. The well supported second fancy, The Omega Man came up tops in the lower division of the event, easily beating the public choice Sling Shot from Lokanath Gowda's yard. Likith Appu who is enjoying a good run produced another confident effort on the winner. Capri Girl from Azhar Ali's yard was fancied sweetly in place and the `Girl' didn't let Azhar down, finishing a suggestive third.

The public rage Sofiya from Sulaiman's yard made a winning debut in the opening event, the third division of the Vani Vilasa Sagara Trophy. The well bred filly from the Kunigal Stud Farm had impressed in the morning trials and in her first attempt displayed good temperament and skill to make a winning start. Maybach expectedly finished second behind the facile winner.