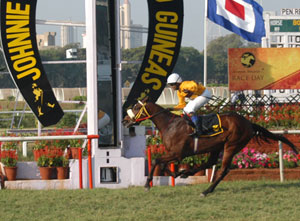 ‘It’s going to be one-horse race’ was last heard when Continual ran in the 1998 Indian 2000 Guineas (Gr.1). This year this rare term was back in circulation as there was no real challenger to Southern Empire in the Johnnie Walker Indian 2000 Guineas (Gr.1). And the son of Placerville out of Stunning reduced it to just that after B. Prakash took the joint property of Dr M. A. M.Ramaswamy and Zavaray Poonawalla to front and dared his eight rivals to catch him. Leave alone challenging the S. Ganapathy trained celebrity, none of the eight horses in the line up were in fact able to disturb Southern Empire’s shadow. It was total domination right from the word go till Prakash stood up in the stirrups near the winning post and waved to the gallery. Rococo came from way back to take second ahead of Bravissima. Portrush went short of stamina after coming home through the shortest way and was relegated to the fourth spot. Ramaswamy’s camp had two more winners on the day in Ruben Star and Allanridge. Ruben Star (Placerville – Forest Fantasy), who reeled out two absolutely pathetic runs earlier, finally came good in his third attempt. Irishman Colm O’Donoghue worked hard on him to gain the upper hand from Beyond Belief which he eventually managed with a fair degree of comfort. There was an inexplicable drift in the odds of Bright Side but nothing could be made of it since she was jostled by the winner at a very crucial stage of the race before finishing runner-up. Beyond Belief ended up a fair third with the luckless Samarkhand ending fourth. It is reported that the owners and the trainer of Samarkhand have lodged a complaint against jockey K. P. G. Appu astride Morpheus for deliberately hampering the running of their horse after Malesh Narredu confirmed their doubt. Allanridge (Alnasr Alwasheek – Classical Elegance) found that extra bit of vigour when persuaded by B. Prakash and went on to overwhelm Desert Dust and The Praetorian close home. Earlier, Desert Dust assumed control of the running from joint favourite Beau Monde with The Praetorian looking large on his outside. Apprentice D. K. Ashish faltered in failing to keep control of his horse which veered out and gave Allanridge the window of opportunity Prakash was looking for. Master Planner ran an uninterested fourth and could have better prospects in his future outing. Malesh Narredu driven Fiery Fortune (Hymn – Sparkling Champagne) from Magansingh Jodha’s yard scored a quick encore when he moved with gigantic strides in the straight and wore down favourite Red Apache, who ran a lacklustre race. Saarah was her energetic self as usual and ended a close second with Simply Smashing moving in to finish a late third. Irishman Niall McCullagh seemed to be out of form on the big day while C. Rajendra booted home a solitary through debutant Alvarita (Jade Robbery – Shanley). The Imtiaz Sait trained filly followed Enceladus and Luck Factor until entering the straight and where Rajendra signalled her to take charge. Alvarita swooped down on the leaders and it was no contest thereafter. Festive Light lost precious ground when taken out by Luck Factor nearer home yet was not disgraced in this defeat. Imtiaz led in another winner in quick succession when Mischief In His Eyes ((Major Impact – Stars In Her Eyes) overcame the challenge of favourite Balance De Power. Harish had to employ his skills for the second time on this horse to gain victory. Wall Street had an easy outing when finishing third ahead of Gaea, who too seemed to be enjoying being away from the limelight. Bezan Chenoy’s candidate Adam’s Star (Placerville – Mitzvah) scored a major upset when he outwitted his stable-mate Agha virtually on the post. Jockey Aadesh Kumar showed some uncharacteristic aggression when throwing a challenge at the T. S. Jodha ridden Agha. Flashing Star came with long ranging strides to finish third and was given too much to do in the straight after lying at the wrong end of the field till the final bend. Oyster Cove ran fifth without taking any stress and should be watched closely in his next endeavour. Flying Rani (Fly So Free – Winning Spurs) also shocked the followers of form when the Dallas Todywalla nursed filly was powerfully steered by Harish to collar Struie in the dying moments of the race. Struie was being hailed as the winner after she ended the flattery of both Something About Her and Nanjing before it had barely begun. Hormuz Antia had a silent coup on Opium (Alnasr Alwasheek – Iquique) who proved to be more potent than the favourite Cocaine. The Vikram Jodha ridden mare came with raking strides to end the start to finish mission of the favourite, who was further relegated by the bottom-weighted Tafeta. The runner-up needs galloping ground and should earn her corn bill in this same age group sooner rather than later.