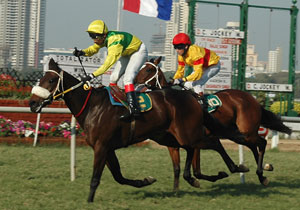 Young Faisal Abbas never had it so good in his brief career thus far and wouldn’t have asked for any more. This third generation horse-trainer saddled a great treble with Tribal Warrior, Lago Medio and debutant Labuan. All the three horses had the services of the hard-working K. P. G. Appu, a riding ace from Bangalore. On the way to Faisal’s treble, the owners of Lago Medio and Labuan had the opportunity of picking both trophy events of Sunday. Lago Medio (Royal Kingdom – Gumbaru Etsu) needed no hard-selling for his talent as an able sprinter and the market forces had no hesitation in bestowing the favouritism on him. The nimble-footed Lago Medio set the tone for the race with Enchanting Girl trying to pace with him. He remained unruffled throughout and when Appu put him in top gear he just drew away from her. Culture Shock from S.Ganapathy’s yard seemed more happy to be in the third place and was not disgraced when being allowed to have his way by the other runners who themselves were content remaining in the background. Te Quiero stood out among them. With Quest for Cash showered with all the attention in the bookie’s ring and some going the way of Dazzling Skill and Uruj, Labuan (Major Impact – Lunar Music) was given a miss and he found himself in the company of the horses for which the bookmakers were ready to dole out stakes in the range of 10’s and over. Taking a great leap from his debut show, Cobble Court went running to the front and waited till Quest for Cash came to divest him of his responsibility. Pesi Shroff’s on-money ward flattered for a while keeping Salandra at bay but had no answer to the brilliant run uncoiled by Labuan. The bay gelding unleashed a tremendous turn of foot to come from way behind and running through the field like a hot knife cutting through a slab of butter. Quest for Cash should be better off with experience and so will Salandra. Dazzling Skill was not given a punishing run. Party Celebration had a forward run and likely to run true to his name in the near future. The long in tooth Tribal Warrior (Shareef Dancer – Quickening) earned his corn bill and set the ball rolling for his master. Yet his task was not that easy. It was Thunderelo who, as if in approval of Nirad Karanjawala’s decision to do way with the pacifiers immediately after one run, came through the shortest way home and was being hailed as a winner. But Appu had other ideas going on in his head and he kept reminding Tribal Warrior of his outstanding bills with his whip. Appu found Tribal Warrior responding gallantly and bringing Harish’s effort on Thunderelo to a nought. Favourite Cocaine raced thereabouts in the third position without posing any threat to either Tribal Warrior or Thunderelo. Grey Strom wasn’t really keen to put his best foot forward and ended a close fourth. Warning’s forward run was an encouraging and an improvement over his previous show. Harish, another Bangalore-based rider, had a brace of winners. He started off on a high note astride Mansoor Shah trained Collateral (Libor – Spring Water), who had been waiting for the right moment to strike. The replacement of F. Irani with Harish in the saddle brought a sea change in the attitude of Collateral and he had some submissive rivals to help his cause. C. Rajendra would certainly like to put his performance on this day behind his back as soon as he can. He kept Zeus in a none-too-favourable position on the rails and switched his path only when Collateral was running full steam ahead. Ring Bearer also fell in the same category albeit with a different modus operandi. Harish’s second success was gained aboard Shiraz Sunderji saddled Trojan King (Tirol – Trojan Lady) after a hard-fought battle with Rage of Angels. Earlier Latest News took over the running in the straight from Misty Stream but was unable to stretch out as Trojan King came at him. Rage of Angels seemed poised to overhaul Trojan King at one stage but Harish was relentless in steering his mount to victory. Regal Fantasy (Storm Trooper – Sea of Love) from Rehanullah Khan’s yard though neglected in the betting run ran true to form and swept past rank outsider Asian Express when P. S. Chouhan asked her for an effort nearer home. Thunderella kept the flame of hope of her supporters flickering with her runaway tactics and which was stubbed out abruptly Asian Express and Regal Fantasy. Beaming laboured to finish third. Dancing Bride was there in the vanguard but without any intent to a positive move. Rookie Dashrath Singh atop Magansingh Jodha trainee Notable Runner (Case Law – Noble Ballerina) pulled the rug from beneath the feet of favourite Mazan and making every post of the six-furlong journey a winning one. Niall McCullagh was seen piloting the public fancy Victor (Diffident – Victory March) to an effortless victory in the concluding race for trainer Dallas Todywalla. The recent acquisition of Iqbal Nathani hit the front when the gates opened and continued to dominate his rivals till the wire. Peoria and Thundering Hero remained in futile chase throughout with The Rebel barely managing to keep himself away from coming in the money. Alaskan Zone finished fifth but was the best of the beaten brigade.