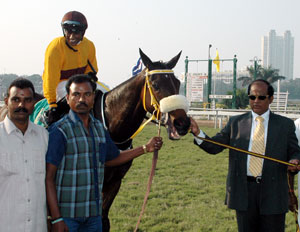 This was no regional classic but part of the all-important five Indian classics, yet the trend of Dr.MAM Ramaswamy’s colours being carried to victory by a jockey other than B. Prakash, started by Secret Memory at Pune, remained intact in the Deutsche Bank Indian 1000 Guineas (Gr.1). Haunting Memories, who was seen as the next three-year old in the country after Southern Empire received a jolt from her own stablemate Guest Connections (Placerville–Crown Collection). Haunting Memories had notched a laboured win over Pampered Princess on the inaugural day of the season but that was seen as an effect of her long lay off. Guest Connections on the other hand had been rested after her victory in the 1800 metre Fillies’ & Mares’ Stakes (Gr.3) at Pune. Against this backdrop, it was no surprise that Haunting Memories continued to command a healthy respect as far as her ability to win this race was concerned. She appeared to be playing to the script till the last furlong of this 1600 metre classic after going in chase of Pampered Princess from the gates. But Guest Connections, after lying unconcerned at the wrong end of the field for most part of the race, came with all guns blazing in the home stretch forcing Haunting Memories into submission and also making her look ordinary. Bravissima, Strawberry Fields and Gruezi ran impressively to finish in that order behind Ramaswamy’s duo. Although Haunting Memories was beaten fair and square, one failed to understand the Prakash’s strategy of hunting down Pampered Princess, who was going to come back to him sooner or later. Haunting Memories was just one among the long list of horses that were unable to justify their billing and left punters in a hole. Catalunya and Roman Beauty were the only exceptions to this trend. Catalunya (Binkhaldoun–Cats Concert) from Narendra Lagad’s yard prevailed over Gatravat by a neck but not before taking some heavy belting from jockey S. N. Chavan. Rookie D. K. Ashish lost his whip near the 400m-marker and played second fiddle for the second time in four days. Jockey Nirmal Jodha accomplished a start-to-finish mission astride the Bharath Singh trained Roman Beauty (Razeen-Amadora) despite the looming threat of Rajendra ridden Incroyable in the straight. Earlier Rajendra drove Mansingh Jadhav’s charge Atmosphere (Tirol–Stratospheric) with great aplomb and inflicted a short-head defeat over favourite Rejuvenite, who was humbled despite being ridden with full force by Niall McCullagh. Enaksi came into the picture too late to make any impact but ended a length close to the runner-up. Niall suffered a similar defeat on World War Three at the hands of Hosidar Daji saddled Adrenaline Rush (Steinbeck–Stimulating). World War Three made the entire running till the stands over the mile and quarter journey but was forced to succumb to Adrenaline Rush, who responded magnificently to the strong urgings of Harish. World War Three’s full sister Fantasy Lake (Placerville–Island Charm) showed a clean pair of heels to her eight rivals after the withdrawal of favourite Casual Look at the gates. The C. D. Katrak nurtured filly had obviously profited from the forward run she had on debut and claimed the upper division of the Sir Jamsetjee Jejeebhoy Trophy. The lower division went to Mathematica, the Black Cash sired daughter of Star Rock. The Nosher Cama trained bay filly took charge after Gypsy’s Advise surrendered the lead on entering the straight but was soon joined by favourite Open Opinion and even put his head in front briefly. But jockey Neeraj Rawal asked for a bit more from Mathematica and found her in an obliging mood. She spurned Open Opinion to make a winning debut. Supreme Attraction ran a faraway third. Pesi Shroff’s ward Celestrella (Burden of Proof–Divine Dreams) provided Niall with his solitary success of the day. The run unleashed by the bay filly was so tremendous that Torque fell by the wayside in the Seth Ramnath Daga Trophy. Hoofbeats ran third and probably may have needed this run. The withdrawal of the piping hot favourite Aqua Glow in the opening event paved way for the Sangramsingh Joshi schooled filly Vedic Chants (Dark Nile–Clytie) to register her maiden career win. Earlier King’s Best called the shots and led merrily till the others joined the issue. Only Vedic Chants managed to gain momentum after given desperate reminders by Nirmal Jodha. The biggest shocker of the day came in the concluding event when rookie A. M. Tograllu tasted his first career success by guiding Queen’s Special (Concordial–Queen’s Lake) the rank outsider saddled by Magansingh Jodha. The mare was in charge of the running almost all the way and won despite veering out in the closing stages of the race. Excitement dragged jockey R. Shelar towards the wire to end runner-up ahead of St. Moritz and Star Divine. Master of the Game retired after a good forward run. Hormuz Antia’s ward should be ready to strike after some tuning and probably in the lowest class. Boss Elements’ poor performance was far from satisfactory and really questionable. The same could be said of Take On.