Punters win 7-1 against the bookies 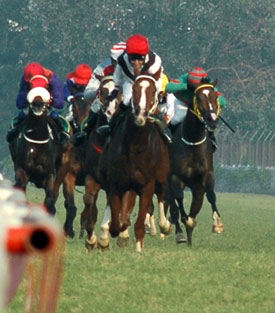 When Niall McCullagh and B. Prakash fetch cent per cent results from their respective engagements you don’t need a rocket scientist to guess the fate of the bookies. The punters were still riding the wave on Thursday after being on a winning spree since the current racing season began. The final score at the end of the day stood 7 – 1 in favour of the punters. Sharing the day’s spoils with Niall was B. Prakash, who set the tone for the day’s proceeding astride S. Ganapathy saddled Culture Shock. The usual drama witnessed during betting time also presented itself when fears of some worse fate awaiting Culture Shock arose after the odds against him drifted. The son of Diffident out of Shocking unleashed a powerful run to come through the shortest way home after Horse Raddish and Private Eye had done all the hard work till opposite the stands. He remained in charge of the lead despite the late flurry from Gatravat. The margin of victory was a mere half-length which may flatter the runner-up. Prakash retired to the shower room fully content after accomplishing the formality of steering Orlando Bloom (Major Impact – Special Treat). The bookies were too miserly in offering odds against this maiden juvenile and had not made a wrong assessment of Orlando Bloom’s talent as proven by the bay gelding when easily accounted for front-runner Crown Affair and Great Giver opposite the grand stands. Raiba ran a suggestive fourth. Niall was in destructive form after finding his moorings last Sunday. And the man to give him the leg up on all three occasions was Pesi Shroff. Niall drew first blood with Dreaming (Placerville – Hall of Honour), who had been a victim of Etoile’s waywardness earlier. The filly ensured that no hard-luck stories took place by setting her own pace for the mile and quarter journey and going past the wire a good five lengths clear of Flying Rani, who was an identical distance ahead of Radical Power. Struie played up after being stalled and injured herself in the process. Subsequently, the official vet didn’t permit Struie to run and extinguished the hopes of an interesting finish for the race. Crown Court (Burden of Proof – Queen’s Rule), a half brother to Saddle Up, ran true to the promise shown in his last run against Beyond Belief and was a facile winner of the Pelican Trophy. Golden Triangle tried to steal a march in the straight and enjoyed the lead momentarily before the powerful burst produced by Crown Court rendered his effort futile. Skywards laboured hard before ending third ahead of Marquisa, who graced the wrong end of the field until the race was in the safe-keeping of Crown Court. The third winner was an armchair ride for Niall. The victory of Blue Ribbon (Alnasr Alwasheek – Endorsement) was truly impressive. The bay filly began the pursuit for her maiden win is right earnest as Niall rode her up with pace and had company in the form of no-hopers Gold Craze and Sensuous Touch. The order remained unaltered till heads turned for home. Blue Ribbon broke away from the pack as soon as he received the signal from the saddle and the winner was sighted long way from home. Debutant Marmaris was out for an airing but didn’t fail to exploit the opportunity for an educative run before she finished second. Sensuous Touch caused some nervous moments for lesser-known rider S. Sameer, who was assigned a task far different from what the filly was intent on achieving when she raced along side Blue Ribbon. Sameer somehow managed to do control the damage to some extent though awkwardly. C. Rajendra rode a solitary winner when a rechristening exercise brought some good fortune for Zroom. Suraj (Major Impact –Zeinelle), trained for new a bunch of new owners by Altaf Hussain, was in striking distance of Last ‘N Impression till the field of twelve started for the final journey home and swept into the lead thereafter to post a comfortable win. Desert Conqueror and West Coast Eagle looked intimidating at one stage but Rajendra drove Suraj for an overdue win. Perfect Attraction kept her saddle-partner P. S. Chouhan on the edge of his seat in the gates and ran without much hope after failing to take a fluent jump. Wild Vegas ran on late to finish fourth and should earn a bracket over a longer trip albeit in the company of older horses. Lone Trojan (Tirol – Trojan Lady) proved aptly named for the day towards the cause of the bookmakers. Trainer Bharath Singh’s ward swooped on Saarah after some relentless persuasion by the whipless D. K. Ashish in the home stretch. Saarah was shown early daylight by Nirmal Jodha and was forced to play the role of a bridesmaid for the second time this season. Rare Look was also in the hunt till the wire but Chouhan was unable to extract that extra bit required to overpower Saarah. Favourite Leonora ran disappointingly and needs to be left alone till she proves her worth. Spiritual Hymn (Hymn – Spirit of Patxi) was given a spirited ride by Dashrath Singh to overcome the traffic snarls set up by J. Chinoy atop Sam Aldo and went sailing clear to complete the rout of the bookies. The Magansingh Jodha trained young filly began her quest for a clear run from the last bend when High Voltage and Sam Aldo were disputing the lead. After a couple of failed attempts Spiritual Hymn finally managed to pierce through the opening between these two runners even as Only For Don was trying to make hay. But Dashrath Singh’s remarkable poise saved the day for Spiritual Hymn much to the chagrin of the turf accountants.