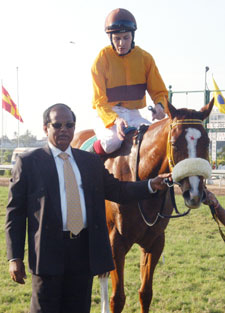 It was at the Mahalaxmi racetrack around Christmas last year when Silken Star’s career started blossoming. By the end of that season the chestnut daughter of Razeen out of Fly For Baby had graduated to the top with three wins in her kitty. Silken Star however seemed to be out of depth in her short stint back home in Bangalore. When she returned to race here on the inaugural day Silken Star ended an unextended third behind Agha hinting at her preference for this western India racetrack. True to the promise shown in her lung-opener, Silken Star romped home in the Panalpina Cup run over a mile and quarter allowing Colm O’Donoghue to begin his new campaign here on a winning note. S. Ganapathy’s charge was ridden well off the pace by the Irishman as bottom-weighted Simply Glorious assumed the responsibility of leading her four rivals into the home stretch where the second in demand Magic Touch sailed smoothly into the lead. But the P. S. Chouhan ridden filly from Zadmal Singh’s barns soon had company in the form of Silken Star. The filly easily wore down Magic Touch and cantered home to herald her return to form. Aspinalls continued to disappoint and ended a tame third. Pesi Shroff trained debutant Diego Rivera (Diffident – Rahy’s Serenade) not only gave an armchair ride to Niall McCullagh in the curtain raiser but also provided the Irishman a big morale booster. Niall has not had further success since scoring on Bravissima last month and had even failed astride a couple of favourites. Diego Rivera was still on the bit when he overtook no-hoper Gorgeous Blue as the field turned for home. Multicultural retired from the scene without much ado at this stage and Diego Rivera then drew away for an emphatic win. Magical Music successfully fought with Red Dawn to acquire the second berth as Multicultural showed no intention of staying in the fray. It was not as easy a task for Niall to earn his second win of the day aboard Dream Destiny. His efforts were full of tenacity yet Niall must consider himself lucky because had Escravos was denied of a clear run when K. P. G. Appu was all geared up to launch an assault. It seemed as if P. Kamlesh astride Englehart was returning a similar ‘favour’ received from Appu during a minor accident at the start. Later, a mad scramble ensued between the frontline contenders at the bend and Englehart after losing ground came up with a vengeance but his aggression didn’t last long. Dream Destiny was the first to overcome both Balthazaar and Hazelhead and it was the powerful finish of Niall that helped Pesi’s ward in his conquest over Escravos. Balthazaar hasn’t got over his problems which is probably why his maiden run under Imtiaz Sait’s guidance seemed so unconvincing. Pesi missed out on a treble when Britney came tantalisingly close to upsetting Strathendrick but her saddle-partner Vijay Kadam was found wanting in experience. Earlier Master Planner surrendered his lead to the Bezan Chenoy trained and Malcolm Kharadi ridden three-year-old gelding Strathendrick, who is by Razeen out of Ocean Sunset. Strathendrick though was not allowed a free run by the unfancied Champions League and his problems were exacerbated when Britney loomed large on the outside. Britney didn’t veer out alarmingly but just enough to let Strathendrick off the hook. The winning post also rushed to the rescue of the even-money favourite, who was a neck clear of Britney with Champions League an identical distance abreast. Elucidate ran a game fourth and should be better off with this experience. Star Bird ran far below par. Saeed Shah saddled Hotstepper (Glory of Dancer – Flying Home) started off in the same fashion as his full sister Czarina did last year, gaining a narrow verdict in the ITB Berlin Cup for first season runners.. Hotstepper was set alight by T. S. Jodha and his sustained run first put paid to the hopes of Elusive Study from Pesi’s yard and then staved off the late challenge of Mickey Mantle. Avec Plaisir and Pillatus ran close behind. The four horses that finished behind the winner are all capable of winning sooner rather than later. Ganapathy’s debutant Wonder Falcon flattered briefly in the straight and faded away without even a semblance of a fight and without doing justice to his ability. Altaf Hussain trained filly Star Conquest (Alnasr Alwasheek – Star Concert) made ample amends for the dismal debut show to win the Audi Trophy in a manner befitting the fame associated with sponsor’s car brand. The filly was in absolute command of the race right from the word go and inflicted a humiliating defeat on The Praetorian, Honeyday and River Dancer. Rehanullah Khan saddled Pepe Junior (Cruachan – Ganadora) unleashed a terrific run down the straight when alerted by Nirmal Jodha and got to avenge his defeat at the hands of Steel Butterfly at Pune. The grey filly sent out by Pesi came within sight of another victory but the weight difference told in the end despite the presence of Naill in the saddle. Sonic Boom failed to thunder and ended a tame third ahead of Hisham.