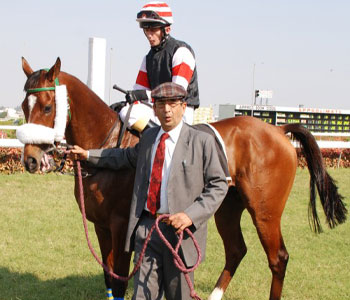 Don Valentino looked to be a lost cause 100 metres from the winning post but appeared with a brilliant turn of foot to put his nose in front, and lift The Baile Lalitha Pershad Memorial Cup, the main race at Hyderabad, on Monday. Backed to the exclusion of the other runners, Shehzad Abbas-trained Don Valentino had the most supporters, in a field of six. The finish turned out to be an exciting one, with the first four places covered in less than a length. Royal Embassy and Strategic Command were the first to enter the home stretch while Arabian Dancer was looking to rush through the rails.

Don Valentino was digging into the well and at that stage the task looked tall and lost for the ‘on-money’ favourite. Jockey Tom McLaughlin continued to ride out the son of Don Michelleto with vigour and he came with a flash in the last 50 metres to join Strategic Command at the finish. Even after viewing the slow motion replay of the finish most felt that the Don may have been a wee bit late. They were in for a surprise when the results of the photo finish went in favour of Don Valentino. Strategic Command finished second while Arabian Dancer and Royal Embassy filled the frame in a close finish. The followers of form were a happy lot on the day, with most of the fancied runners returning to the winner’s enclosure. P.S. Chouhan rode another treble, two of them for the home stable of L.V.R. Deshmukh.

The two-year-old Drum Beat (Major Impact-Star Qualities) made a smashing debut, in the lower division of The Malvado Plate. After a rather sluggish start, Drum Beat improved quickly to track the leader, White Wind, and with 300 metres left in the race, surged ahead to score an impressive win. Ektto Ektto Ektto followed the winner to the post. K.V. Srinivas’s Agastya (European-Olympic Princess) came out of his maiden ranks, winning the higher division on his third attempt. Entering the straight, Agastya was along the inner rails, A Horizontal Urge in the centre and Play The Music on the far side. Agastya travelled better, staving off A Horizontal Urge’s challenge while Play the Music weakened to surrender the third place to Jaden Gil. Apology For Love was withdrawn after she turned out to be troublesome at the gates.

After two forward runs over seven-furlong trips, D. Netto-trained Noor Ulain (Eljohar-Fair Truce) was pitched over a shorter trip of five furlongs and the filly readily won in the hands of E.R. Creighton, in the higher division of The Twin Cities Cup. Invincible Genes and Noor Ulain came in first on the straight and after a stiff fight the latter surged ahead by half a length. The favourite Iceland didn’t look comfortable throughout the trip and just managed to finish third. Bold Brigade and Peasgus Belle were withdrawn before the race. T. Sriganagesh’s Magadeera was the fastest moving in the final furlong and went past the front-runner, Indian Brave Heart, to win the lower division. Sun Bird was tardy at the start and travelled in about seventh position till the last 300 metres but came with a sustained run to finish a close third.

The top-weighted Original Gladiator (Royal Gladiator-Original) from M. Sathyanarayana’s stable was sent in as the firm favourite, in The Track Lightning Plate, run over a mile. The in-form jockey, P.S. Chouhan, who was entrusted to guide the fortunes, rode out on the home stretch to keep Sorbitrate at bay. Sugar Deal and Intrepid Warrior filled the frame. Retaliate was withdrawn before the start. Chouhan rode Deshmukh’s Mystical Knight (Ontario-Royal Applause) to a convincing victory, in the higher division of The Meghalaya Plate. Glen Gyle followed the winner throughout the straight. Corvette, who had started as the favourite was withdrawn after reaching the starting gates on veterinary grounds, while Lone Ranger was withdrawn after the rider, P. Venkat hurt himself in the gates.

Kuchipudi (Hymn-Steinby) was strongly fancied in the lower division, the concluding race of the day and the Anupam Sharma-trainee whizzed past Orient Glory to justify the favouritism. Alberton Star and Disco Flash rallied late to finish third and fourth respectively in a close finish with Orient Glory. Habeebullah’s Your Excellency (Hymn-Spirit Of Patxi) was prominently positioned till the final bend and later stretched out after taking charge in the last 300 metres, in The Singh Plate, the opening race of the day. Garrison Chief warmed up late to take the second spot.