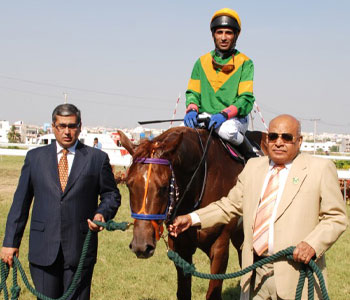 Jockey P.S. Chouhan has been having a dream run this winter at Hyderabad. He rode all his five rides to victory on Sunday afternoon, three of them for trainer L.V.R. Deshmukh, one each for R.H. Sequeira and Faisal Hassan. With just 15 days of the winter season having gone through, P.S. Chouhan’s tally has touched 35, with the nearest competitor yet to reach double figures. Going by this trend, he is likely to set a formidable total by the end of winter. Trainer Vittal Deshmukh had a grand treble, all of which were partnered by Chouhan.

The two-year-old Zamorin (Rebuttal-Rhythm ‘N’ Blues) was sent into the race as the piping hot ‘on-money’ favourite, against his five opponents of which one was still a maiden. The manner in which Zamorin trounced the field on debut had earned him the grades to be the frontrunner in the Million. Dazzling Princess made the early running, with Zamorin moving into second as they passed the 600 metres. On top of the straight, Zamorin was travelling on a tight hold and surged ahead of the leader to gain control. Zamorin, who was never extended on his way to the winning post, will turn out to be a money spinner for the proud owner, Col. S.B. Nair.

Golden Rule moved in to take the second place, after getting a few cracks, in the final furlong, while Arrowinautomode beat Cristiano for the third position. Deshmukh-Chouhan combination wrapped up both the divisions of The Malakpet Cup. The lower division was won by Vijaysarathi while the higher division was taken by Young Sapper. Vijaysarathi (San Francisco-Olympic Way) got the better of Magic Million on the last stride in a thrilling finish. Crown Castle was in front as the field approached the distance marker with Magic Million getting stronger. Although Magic Million was tending to hang out, the D’Silva trainee managed to get pass Crown Castle with S. John on the saddle and just when it looked like he would wrap it up, Vijaysarathi literarily flew from the rear to get the race at the wire.

Young Sapper (China Visit-Run For The Crown), although veered out from the straight course inside the last 100 metres, but managed to hold on by a ‘head’ from Guiding Light at the finish. Al Sarraah received maximum support in the betting but failed to accelerate on the straight with the rider looking confused as to which gap he should take. Proof (Burden of Proof-Florale) outclassed the field in The Flirting Vision Plate, a race for two-year-old maidens. The R.H. Sequeira-trainee made every post a winning one on his way to a romping seven-length victory. Toli Toli Toli raced in the last position till half way up the straight and finished on well to get to the runner-up berth, beating Ache For Love to third.

The twelve-horse field in The R. Raghupathi Reddy Cup, for horses in the highest category looked very competitive and picking a winner was a tuff task. A last-start winner, Above The Line hit the front in the final furlong with Chouhan getting Splendid Act into rhythm. S. John on Above The Line was in full flow giving a strong ride while Chouhan preferred to use only his hands and heels to goad his mount to the front. Splendid Act (Case law-Chocolate Chip) went half clear of Above The Line towards the finish when Dancing Touch came with a late flourish to finish a slender ‘neck’ behind the winner. A well-calculated gamble from Zoheb Shaikh’s stable just managed to materialize in the opening race, the lower division of The Dynamic Dancer Plate.

Fearless Mission (Case Law-Eternal Beauty) charged to take the lead on jumping out of the gates and led all the way to win, after a stirring duel with Jingles in the final 150 metres. L. D’Silva’s Aficionado (Epicentre-First Wave) tracked Gabriel till the top of the home stretch and accelerated well when asked for by Ch. K. Chary to win the higher division with ease. Max Baby chased the winner to finish second while Cannon Vision took the third spot ahead of Shes Got The Look. Gold Leaf was withdrawn before the race. On a day of close finishes, where six of the nine races had to be referred to the photo, Forest Flame (Eljohar-Streaking Senorita) beat the public choice, Al Jabal, in a nail-biting finish in The Nelston Plate.