Fly The Fury impressive in victory 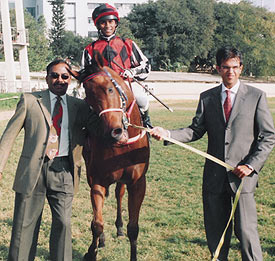 Fly The Fury (Suraj Narredu up) winner of the Karnataka Police Trophy being led in by trainer Mr. Padmanabhan & owners Mr. Anirudh Jajodia

Padmanabhan trained Fly The Fury, competing in a race meant for horses rated 40 and above, straightaway asserted herself with an emphatic win over seasoned opposition, heralding her arrival as a possible Sprinters Cup prospect during the Invitation Cup weekend at Chennai in March '05. Fly The Fury surely has to make progress from here to be a realistic challenger but judging by the filly’s transition into a winner in the highest class, with just three runs under her belt was suggestive of immense scope for such an eventuality. This was the first time that Fly The Fury was running in open company and though she had the weight in her favour, the manner in which she sprinted away to victory, with something to spare, was suggestive of more to come. The public confidence in her abilities was displayed in Fly The Fury being quoted at cramped odds in the ring. The small made daughter of Diffident is certainly endowed with a great deal of speed and this half-sister to Derby winning Obligado raced in front along with Taurian before leaving the field to fight for minor berths in the homestretch. The manner in which she quickened left the opposition with no hope except to chase her shadow. Saratoga Sizzle ran on to finish second ahead of The Music Lover while Laguna Blue who found himself in this elite company on the basis of his finishing behind River God in a terms race was not disgraced when finishing fifth. The winner clocked a smart time of one minute 13.5 seconds. Ganapathy’s Go For Gold who had created a favorable impression while recording her maiden win, proved too good for the opposition. Go For Gold had to be shaken up to get past the only realistic challenger Turbo Shot but once she surged ahead inside the final 350 metres, there was no looking back. First timer Holding Court was a faraway third highlighting the gap that existed between the winner and the rest. Holding Court lacked early speed and jockey Appu had to expend considerable energy in trying to be in close attendance of the fancied duo but by then he was a lost cause. One hates to write anything about the trainer-jockey combination of Irfan Ghatala and Silva Storai because they do no wrong and they are needlessly pulled up for what is perceived by others as wrong! Ironically, Dr Evil, it was, who won the Dr S R Girirajan Memorial Plate (Div I) quite convincingly where Freebee took an unhurried approach. The Stewards have opened an enquiry into the running and riding of Freebee. The lower division of the race was claimed by Fashion Verdict who got up in time to edge out Equally Good close home. Incidentally Fashion Verdict has won twice after being thrashed by Freebee in summer. Puttanna’s Tribal Fantasy scored a runaway win in the 1100 metres Gomos Plate. Full sister to Winelight, Tribal Fantasy has been endowed with a tremendous turn of foot and she won in the manner of a horse which could reach the highest class unhindered. Such was the quality of her win. Tribal Fantasy clocked an impressive time of one minute 07.64 seconds despite being eased up long way from home. Dhariwal trained Capannelle appears to have bounced back to his old form which had seen him record a smashing win long ago. After a couple of listless runs, Capannelle showed his mettle when decimating the opposition in the 1600 metres Capt H D Fownes Memorial Plate. The Big Fight and Bajo Grande took the minor berths but they were no match for the winner. Now that he has struck form, Capannelle should go far. In the day’s other action, favourite Indian Fame was not hard-pressed to win while in the concluding race of the day, Darashah’s Exalted had it easy against a listless opposition. Settle The Score was alerted to the task rather late in the day and his eye-catching third had the Stipes opening an enquiry into the running and riding.