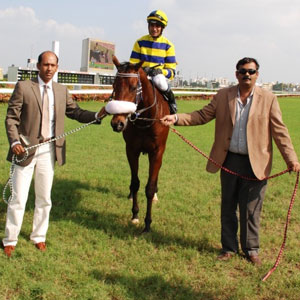 Kohinoor Wish outclassed the opposition in The Sri Shamlal Gupta Memorial Cup, the feature event of Monday’s racing at Hyderabad. A seven-furlong race for horses in the highest category was a preparatory one for Prasad Raju’s Kohinoor Wish. The son of Gaswar raced in a handy third till the final bend and cruised ahead for a fluent victory. The ten-year-old Coral Gables was no match for Kohinoor Wish but nevertheless beat the rest convincingly to take the runner-up berth. Speaking to Indiarace after the race, Prasad Raju said, “With just 70% fitness and not being stretched in work, he won impressively, clocking a fast time.

The 2000 Guineas is his next assignment.” Jockey P.S. Chouhan continued his domination, with a fine treble, crossing double figures to take his tally to 13, very early in the season. The ‘money-back’ favourite, Rapture of Victory (Alnasr Alwasheek – Raptures) was the first win for him in the day, winning The C. Sathyanarayana Memorial Cup. Royal Embassy brought the field on the straight and Chouhan had to goad Rapture of Victory to surpass the leader. Chouhan had an armchair victory on Drayton (Epicentre – Crystal Beauty), in The Bakranangal Plate-Div.I.

The well-backed Drayton from trainer Netto’s yard made every post a winning one, leaving the field well behind. Sugar Deal took the second spot ahead of Rich and Famous. The higher division of The Cabaret Plate, the concluding race of the day was also claimed by the Netto-Chouhan combination. Spectacular Falcon cut the wind and was looking to upset, kicking on in the straight, while Maximum City, who had chased the leader, carrying the top weight of 62 kilograms finding it difficult to get past. Chouhan brought Star Favours with a mighty run to get the better of the two in the dying moments of the race. Spectacular Falcon held on from Maximum City to finish second. The lower division was won by Satheesh-trained Ninja Power (Mr Mellon – Ceebros) from start to finish. Pacific Groove was in futile chase throughout the straight. Leo D’Silva led in two winners, both in close finishes.

Golden Rule (Placerville-Orient Dance) lifted the Grace Hanover Plate, for two-year-old maiden horses. Dazzling Princess was the quickest at the gates and led all the way till midway up the straight. Golden Rule and Queen’s Craft started to gallop strongly in the final furlong and the former prevailed by a neck at the finish but not before the hapless juvenile getting whacked by over a dozen times by the rider S. John. The favourite, Challenger, failed to impress, finishing a tame fourth behind Dazzling Princess.

Leo’s Mighty Prince (Tirol- Progressing) managed to peg back the valiant effort of Yippee who fought out every inch of the last furlong but failing by a whisker at the all important end, in the higher division of The Time and Place Plate. Jockey Ch. K. Chary, who had ridden the winner, picked up the lower division of the race with Victorous Sally. The public choice in the race, Lone Ranger, strived hard to carry the top weight of 61 kilograms, in front but started to tire out and succumbed to Queen of Habashe.

The ‘Queen’ took charge and looked to pull it off when Chary brought Victorous Sally with a late burst to emerge clear. Green Mist and Krithiman rallied in late to fill the frame, pushing Lone Ranger to the fifth position. S.A. Shehzad Abbas-trained Al Sarraah (Gaswar – Gatling) won the higher division of The Bakranangal Plate. Moving in snatches, Al Sarraah went past Celestina in the nick of time to justify the favouritism. Silver finished a close third. The runner-up Celestina was reported to have burst her blood vessel in the race.