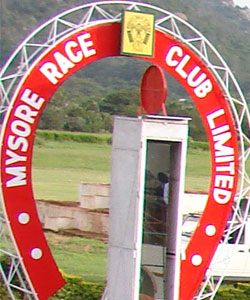 Rakesh-trained Guided Missile justified his high rating while cantering away with The Shimmering Gold Trophy, the feature event in Friday's seven-race card at Mysore. The six year-old had been running at Bangalore till a few weeks ago, and his connections decided to cash in on his eligibility to race at Mysore. They found a race over his optimum trip of a mile, and prepared him accordingly. Guided Missile was opposed by horses who did not belong to the same league. The ones that had some sort of current form had been penalized for their wins earlier in this season.

The bookmakers were quick to realize the situation, and had little hesitation in offering a measly 70/100 on Guided Missile. The apparent lack of any serious threat was indicated on the betting boards, as the other runners were easily backable at fancy odds. Jockey Rajesh rode a confident race on the favourite. He was content to race his mount in mid-division as Holiday Date, Demanding and Brown Sugar cut the early pace and led into the straight. Guided Missile was produced on the centre of the track and asked to quicken. He made light of his top weight and scampered away from a late finishing Amazing One, Brown Sugar and Boston Ranger. The margin of victory wasn't truly indicative of the relative ease with which it had been scored.

The day started on a shocking note for the punters, with rank outsiders winning the first four races of the day. A six year-old mare named Kaliska, who had managed to finish fourth only once in her entire career, set the ball rolling. She had progressively come down to a rating of four at Mysore. Kaliska sported a pair of wings on Friday, as she flew through the middle of a well packed field and scored her maiden success. She credited trainer Bobby with his first victory of this season. Public favourite Latin Twister tried to make all the running but ran out of steam near the bend. Second-in-demand Romantic Design graced the wrong end of the field till well into the straight, before being alerted to his task. Romantic Design was unfortunate to catch Kaliska in an unrelenting mood today. The consistent Mahseer plodded into third place.

The next race saw the eclipse of the speedy Worth A Diamond. This horse looked much better than the others on paper, and the presence of jockey Mani did not dampen the enthusiasm of the punters. The short scurry was suited to his style of running, and he was expected to handle his Class B opposition with confidence. The eight year-old favourite went to the front and led the field into the straight, but had no answers when challenged and passed by Pancho Pete. The Ranjeet trained horse responded to Suresh's urgings, and won by a widening margin of three lengths. This 20/1 rank outsider had already run four times this season. He had finished last amongst a twelve horse field in his previous start. Those present at the race course smelt something fishy and decided to raise a hue and cry. There were mild demonstrations in the stands and the Stewards were quick to realize the gravity of the situation.

There was nothing much they could do to alter the result, but in order to avoid any further disturbances, they ordered an enquiry into the improved performance of the winner. Since a lot of time was consumed by these happenings, the rest of the day's card was set back by thirty minutes. The trend remained unaltered, as outsiders continued to rule the roost. It was the turn of Sharavanan's Prettyyashyashvini to shine in the next race. She was entrusted to apprentice Sreekanth today. The allowance claimed by the boy proved to be decisive. She cantered along the rails and maintained a close position behind Feel My Heart as they swung into the home stretch. A couple of taps from the jockey saw Prettyyashyashvini lengthening her strides and managing to hold the late challenge of Zooming. The last named was quite unfortunate. He was slightly slow at the gates and was totally covered because of his innermost draw. With no place to go, he was held up at the back. Zooming was pulled out at the bend, but his task was huge. The brave horse made up acres of ground on the outer portion of the track to run a close second. Feel My Heart was able to hang on to his third spot. Kishore's Chamcha In Chief won his second race this season by leading all the way, and lasting out to score from Suryarath and favourite Bliss.

The withdrawal of fancied Victory Queen saw a lot of money flowing in the direction of Bliss. This money was obviously misplaced as jockey NM Khan was totally at sea while steering his mount. The horse was given a pathetic ride, as he was seen galloping wide all the way. There is very little margin of error in handicap races for older horses. Such loss of ground has a serious affect on the final outcome of such a race. Bliss was unable to find anything extra and had to settle behind Suryarath while taking the third slot. Racegoers had a brief respite as first Guided Missile and then See The Truth scored as popular favourites. This horse had been relocated from Western India and his owners had waited patiently for almost a year before backing him today. See The Truth gave Rakesh his second winner for the day. Harish used waiting tactics on him and kept him off the pace till the final furlong. See The Truth produced sparkling acceleration and went clear of early leader Wise Words and Royal View. Pal Joey, Mr Bureaucrat and Hitz were prominent till the bend before they retired from the scene. See The Truth is in prime form and is capable of winning again for the asking. Harish completed his double for the afternoon by riding a powerful finish astride Sajid trained Indrajit in the last race of the day.