Vijay Damini The Showstopper At The Guineas 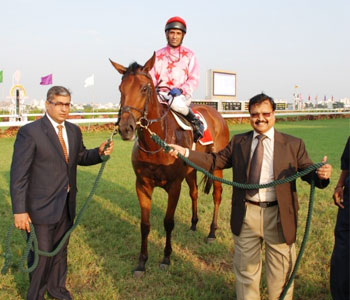 The local Heroine, Vijay Damini, turned out to be the best on the day, beating her rivals in a decisive way in the Golconda 1000 Guineas 2010 (Grade I). String Along being the highest rated filly in the field and a hat-trick behind her, which included the 1000 Guineas at Mysore, was widely expected to turn up triumphant. Sunlight had set her sights on the race after a noteworthy second at the Pune Derby. Carousel deserved attention after a preparatory win, over a mile at Pune and she was looking gorgeous in the paddock.

Carla hadn’t proved much on the track but her latest mock race was eye-catching. Vijay Damini was fresh from her victory in the A.P. Commeration Cup, on the first day of the season. These were the credentials of the top contenders in the race. Vijay Damini (Elusive City – Kabubina) was taken into the front quickly, as the field of nine jumped out. As they started to take the final turn, Vijay Damini stayed in front with Carousel, String Along and Elzaam in close attendance while Lunar Quest, Rosemead, Carla, Sunlight and Golden Queen raced behind. Inside the final furlong, jockey P.S. Chouhan kept the filly Vijay Damini going well in front. String Along was alighted to the task but she failed to deliver the goods finishing second while Elzaam finished a worthy third.

Jockey C.D. Hayes won the hearts of the local patrons, with two brilliantly ridden winners. Cristiano (Don Micheletto – Fleet Footed) was his first win, in the Ardent Knight Plate, a race for maiden juveniles. Vijay’s Conquer and Silver Lid raced in front till entering the straight with Cristiano chasing the duo in third. Silver Lid packed up early on the straight and Chris had started to work his way on his mount. In a brilliant show of jockeyship, Hayes took control of Cristiano, who was hanging in and closed in on the leader Vijay’s Conquer and sped past in the dying moments.

P.A. Culhane, the rider of second placed Vijay’s Conquer, raised an unsuccessful objection on the winner for hampering him for room in the final furlong. Dangerously Armed was withdrawn after he dropped the rider near the starting gates and bolted. Hayes rode Corvette (Burden Of Proof – Corsicana) to a confident victory in the higher division of The Vegavathi Cup. Corvette was positioned in a close fourth behind Royal Bay, Vijay’s Famme and True Fashion till the top of the straight from where Hayes made a swift move to take the lead and staved off a late challenge by Jewel in The Crown who rallied along the rails.

Jewel in The Crown, in her anxiety to push through the gap along the rails, interfered with True Force and Vijays Famme, for which the apprentice was fined Rs. 2000. Both the winners of Hayes were the property of Dr. & Mrs. Vijay Mallya, representing United Racing & Bloodstock Breeders Ltd., and was trained by S.A. Shehzad Abbas. Trainer Faisal Hassan continued with his winning streak, with a lucrative double.

Red Fairy (Hymn – Code Red) fought a grim battle on her way to victory in The Chief Justice Of A.P. Trophy. Raj Veer, Chestnut Charmer, Red Fairy and Zycon were almost in a line entering the final furlong with Dancing Touch and Splendid Act making a strong bid from behind. Red Fairy picked up momentum and surged ahead to win the race. Zycon fought on to finish second while Splendid Act improved along the rails, to finish a close third, ahead of Chestnut Charmer. Hassan had earlier won on Deccan Passion (Brave Act – Antecedent), in the lower division of The Original Vel V. Balasubramani Memorial Cup, beating Stormy Gladiator in the shadow of the winning post.

Stormy Gladiator, who had lost a forward position on the straight came back with renewed vigour but failed by a ‘head’ at the wire. Amontillado and Tiara filled the frame. The higher division of The Original Vel V. Balasubramani Memorial Cup, was won by Indian Brave Heart (Sir Bordeaux – Amorous Delight), with a start-to-finish effort. The Sk. Kassam trainee relishes best when let in front and that’s what he did, making every post a winning one. Sugar Gold was in futile chase on the straight while Grey Shot made a late bid to finish third.

M. Sathyanarayana-trained Dream Deal (Placerville – Desert Lightning), running in the colours of Mr. Raghava Reddy, was backed as a certainty in The Rishi Konda Cup and the three-year-old gelding did not give any anxious moments, winning by a lengthening margin of seven lengths. Regal View was the best of the rest, finishing second. Askioz (Hymn – Skippress) lifted The Medak Plate, the opening race of the day, beating Dance Baby Dance to the second place. Juliet looked to be in contention near the distance post but couldn’t match stride with the two in front and finished third. Flowers of Music was on a start-to-finish mission in the lower division of The Vegavathi Cup, the concluding race of the day, with a lead of nearly four lengths inside the last 150 metres.

Dhrutiman (Placerville – Bold Bird) came with a big run from behind and got the better of Flowers of Music, close to the winning post. Heydan refused to move into the gates and was withdrawn.