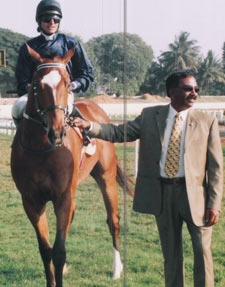 Padmanabhan trained Democraticus made a sensational start to his career, cantering to a splendid win in the 1200 metres Topmost Cup which featured Friday’s races. The breath-taking win of Democraticus was a tremendous advertisement for his sire Royal Kingdom whose first crop has just hit the track. Democraticus made his opponents look timid as he won on the bridle from the word `go’, with the rest of the runners struggling hard to find foot. Democraticus has a bright future ahead of him and his progress at Mumbai in the juvenile millions is one of great interest. Fairy King’s son Burden of Proof has had a great start to his stud career, with three Group I winners from his first crop and his other son Royal Kingdom too should turn out into a sire sensation if the performance of Democraticus is any indication. There was some support in equal measure for Democraticus and Queen’s Glory but the race turned out to be anti-climax because the former won by a widening margin of 10 lengths without being asked to stretch out by his jockey. Kaliyug Raja, who received some support in the ring, chased him up to the bend but thereafter gave up meekly while Queen’s Glory was lost a cause. Connaught Square who had the scales in his favour edged out Randsberg in a close finish in the 1800 metres Rohini Cup, a race for horses rated 30 to 45. Randsberg had the first run on Connaught Square but what went against him was the fact that he is one-paced. Though Randsberg fought hard, he surrendered close home. Randsberg is a horse cut out for longer trips and he could still prove a handful over extended trips as he matures. Fashion Verdict justified the tons of money that poured on him in the Saddle Up Plate (Div I). The result could well have been different had apprentice Ahsan Quereshi been more enterprising on Credential who lost by a neck in the dying moments of the race. Credential had won her last outing after being in receipt of a number of hard cracks but this time out, Quereshi chose not use the whip even once! Quereshi has talent to go far unless of course he decides to take the short cut to riches. Quereshi was suspended for four race days for his lackluster effort and he should consider himself lucky because the Stewards were lenient despite his confession that he was "over-confident’’. The lower division of the race went the way of Mohan Valavi trained Shining Example who made a profitable start to finish dash. Favourite Garuda chased him right through the race without hope. Half-sister to Derby winning Brown Sugar, Arizza profited from the pull in weights when putting across a fairly decent opposition to win the A R Keshava Mudaliar Memorial Plate in convincing fashion. Arizza had lost narrowly to Formidable Force in her last start but this time out, she had the measure of her conqueror with something to spare. There was lot of hype about Moment of Hope and Thursday Nite but they were beaten causes much before the final bend. Favourite Copper Bracelet just about lasted out to win from a late-finishing Syrian Spice in the Parfait Amour Plate (Div I) while Ponnappa trained Sedgemere brought off a big upset in the lower division at the expense of Shubha Mangala, the fancied Baghzad putting up a doleful performance. In the day’s other action, Candramala won without much fuss to enable trainer Ponnappa to have a double for the day.