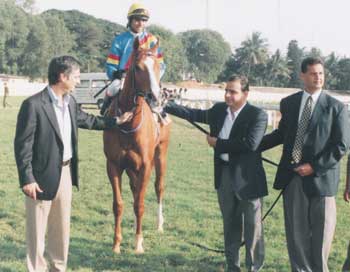 Michael Eshwer trained River God, the highest rated horse in the country, slammed the opposition in splendid fashion to win the Bangalore Turf Club Trophy, a terms race for four-year olds and over, the highlight of races held on Saturday. River God, who is getting better with age, won the sprint event in a record timing of one minute 12.72 seconds marginally bettering the record timing of reputed sprinter Tide of Fortune who had clocked one minute 12.73 in 2003, carrying an identical 61 kgs on her back. The records are updated after the distances were re-measured and starting points pushed back by about 50 metres in the last decade. The proud possession of Sunil Jhangiani and his brother Dilip, River God’s versatility and his felicity over trips ranging from six to nine furlongs mark him out to be truly one of the greats of Indian racing. It is a pity that by the time he joined the stables of Eshwer, he was a known bleeder despite which he has achieved amazing landmarks. Nevertheless, the six-year old River God has also won three graded races on the trot over varying distances. Though River God hasn’t done well outside of Bangalore and Mysore, a shot at next year’s Sprinters Cup and Super Mile at Chennai is well worth a serious try. River God was not known for sprinting abilities till the last Mysore season where for the first time he won over a sprint in emphatic fashion. That was the reason why trainer Eshwer confidently entered his ward in this six furlong race against established sprinters. The confidence reposed in him by the public was amply justified by the decisive manner in which River God won at the expense of an improving three-year old Laguna Blue and the rest. Srinath had River God well placed at the top of the field allowing The Music Lover to set the pace till turning for home. River God shot clear when asked to quicken inside the final two furlongs and won with something to spare from Laguna Blue and Explosivo. Laguna Blue, who has remarkably recovered from a knee chip operation, ran above his rating and unfortunately, he is sure to incur a stiff penalty for this effort which will prevent him winning his share of handicap races. One Magic Moment appears to have lost her zest. Champion jockey Prakash had a bad fall in the day’s second race which will see him out of action for at least a month. Prakash reportedly suffered a fracture to one of his ribs following his fall on Fine Choice in the December Plate, a race for first season runners. Two of the fancied runners, Queen of Swords and Awesome Royal did not get a good start and ran green and were never in the reckoning. The speedy Opera Queen who had the benefit of a race run led the field from the word `go’ and won quite capably from Seis Corona. Approaching the final bend, Fine Choice who was in the third position was moving quickly on the outside to take striking position but in doing so, he had run into the path of Estrella who had slightly shifted out. Fine Choice appeared to have clipped Estrella and jockey Prakash fell to the ground which caused his rib to be broken. Only these falls have kept Prakash away from the saddle. Otherwise, he has had an uninterrupted and trouble-free run. Dhariwal trained Celtic Chief recorded yet another smashing win, winning the seven furlong race with ridiculous ease. His next target is the Indian 2000 Guineas. Though Celtic Chief is immensely talented and has classic aspirations, the race may have come too soon for the son of Burden of Proof because he lacks the experience to take on seasoned performers like Star Admiral. Nevertheless, there is no doubting his immense potential. The Zamindar yet again failed to make it to the winner’s enclosure narrowly. The Zamindar was tardy at the start, traveled wide and appeared to be in a position to get the measure of The Big Fight but failed narrowly. The Stewards have ordered an enquiry into the race. The Big Fight which had the services of Appu this time out, profited from the better positioning sense of the jockey and stole a march on her opponents at the top of the straight which held her in good stead as against the leisurely approach of the runner up. Bred as full sister to the celebrated Running Flame, Dramatic Heights finally obliged, winning at the expense of favourite Talented Star. The small made, light-framed filly, Dramatic Heights used to expend lot of nervous energy well before the start of the race but this time out, she appeared to be calm and composed which helped her perform better. In the day’s other action, Dominic’s Miracle Fantasy picked up steam close home to edge out Bravo Bedford while Passing Glance was not unduly pressed to win. Reach Out ran a miserable race.