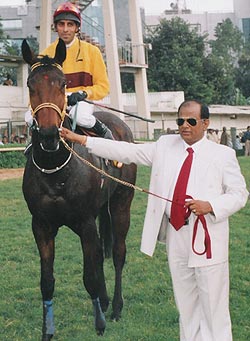 Forever Elegance (I Chisty up) winner of the Bangalore 1000 Guineas (Gr II) being led by trainer Mr. Ganapathy

The spectacular improvement shown by Ganapathy trained Forever Elegance who swamped the opposition in the Gr 2 Bangalore 1000 Guineas was the highlight of the races held on Saturday while Full Speed’s defeat which caste a serious doubt as to the fairness of the game was the lowlight. The callous disregard with which the Mysore Derby winner was entrusted to an apprentice when better quality jockeys were on hand which led to the defeat of the favourite and cost tons of money to the public raised many an eyebrow as to the intentions of the trainer in doing such an act. The fact that Full Speed went into the race with steel shoes as against the aluminum shoes sported by him on all other occasions also made many wonder as the motive behind such a move. This coming on a horse owned by sporting owners who delight in leading in their winners surprised all and sundry and they have a lot to explain as to how they let the trainer decide the fortunes of a Derby winner so callously, with utter contempt for public. Be that as it may, the Guineas field had an open look about it because the runners, barring Only For Gold, had modest credentials. Only For Gold had only the previous week run in the Golconda Guineas and the hard race and the travel were expected to have a say on her performance. Blurr had not shown any improvement and the fact that she has never won a race on the Bangalore track put a question mark about her prospects. Camarioca who went into the race without the benefit of a race run lacked the fitness needed for a race of this kind. Queen of Fashion had always fallen short of expectations while Gaslight was the only one who had showed improvement as indicated by her running Star Admiral close albeit with the benefit of weight in her favour. Forever Elegance who had shown a quantum improvement in her last win was the dark horse in the fray and the daughter of Placerville lived up to that belief with a power-packed performance that left the field stranded. Camarioca led the field from the start, with Queen of Fashion in close attendance, with the rest of the runners spread out in close attendance of each other. Blurr who was lethargic at the start and Forever Elegance graced the rear. Camarioca packed up on turning for home and Queen of Fashion surged ahead but her lead was short-lived as Only For Gold came up with a good burst of speed. In the meanwhile, Imran Chisty brought Forever Elegance on the wide outside and the lesser fancied horse flew past Only For Gold in a trice to win with a great deal of comfort. Gaslight finished on to take the third spot behind Only For Gold. Forever Elegance has indeed made a sensational improvement and if she stands up to training, she can go far. Mysore Derby winner Full Speed towered over the rest in the Dariya Daulat Trophy, a race for horses rated 40 and above, the supporting event of the day. To the shock of many, trainer Irfan Ghatala chose to entrust the Derby winner to apprentice Babulal Paswan as Silva was sidelined by an injury sustained during a fall in morning workouts. Though he had requisitioned the services of Frenchman Samuel Fergeat to ride no-hopper Flightingale in the Guineas and as insignificant a horse like Zabdiel in an inferior category race, the trainer’s confidence or is it lack of concern for public expectations (?) that made him put Paswan to ride a big horse is something only he can explain. In the event, Paswan messed up and the favourite ended up finishing third behind Golden Fortune and Jumping For Joy. Full Speed ran all over the place but one crack from the apprentice had the favourite flying home rather too late. Betting is the lifeline of the sport and one cannot disregard public interests by such an act. While the public lost money, the trainer lost public esteem and the connections all the goodwill that they enjoyed these years. Surely it was reprehensible and acts such as these are what put the sport in poor light. There was a flood of money on Puttanna trained Simply Amazing. The price continuously shortened on him while that on Amazing Eyes kept on increasing. Amazing Eyes was sluggish at the gates and this kept the track record of Prakash intact. The jockey has always lost races in like manner whenever he is not keen on winning Though Simply Amazing was none too well placed at the top of the straight, he proved too good for the field in the end. Way To Wealth landed a good touch in the Own Opinion Plate (Div I) where favourite Synopsis once again found one better. In the lower division of the race, Noble Excellency put daylight between herself and the rest. There was strong support for Smoke Dancer which was misplaced. Tribal Fantasy ran a good forward race and should profit from this effort. Prakash drove out Formidable Force to a narrow win over Arizza, half sister to Derby winning Brown Sugar. Arizza very nearly collared the front-running Formidable Force who fought back to get a neck verdict at the finish. In the day’s other action, Alannah finally came good at the expense of Arthi while Pay The Price recouped the loses suffered last time out with an easy win.